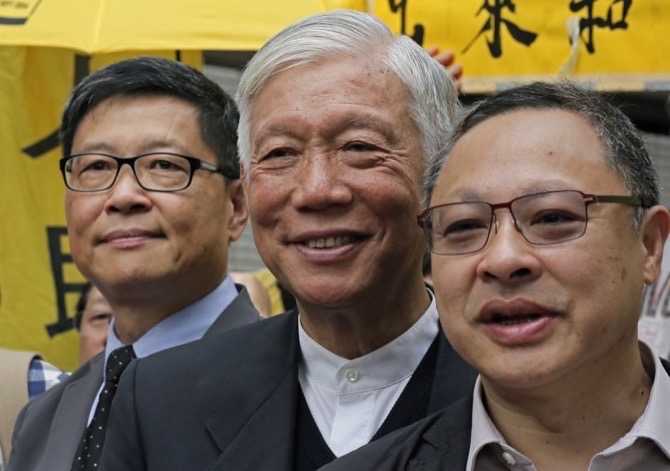 A Hong Kong court set the sentencing of Occupy protest leader Benny Tai and eight other activists for April 24, the latest step in a trial that caps the China-backed government’s effort to punish the movement’s organizers.

Chan on Tuesday found Tai, a University of Hong Kong associate law professor, guilty of conspiracy to commit public nuisance and incitement to commit public nuisance. He also convicted the others on charges related to their roles in the 2014 movement, including Occupy’s two other main leaders – Reverend Chu Yiu-ming and Chan Kin-man, an associate professor of sociology at the Chinese University of Hong Hong.

Supporters outside the courtroom applauded as the group left yesterday, chanting: “We are Hong Kongers” and “We are fearless.”

Ranging in age from their 30s to 70s, the nine defendants span generations of Hong Kong citizens who have been agitating for full democracy. The defendants had all pleaded not guilty, calling the prosecutions politically motivated.

Hong Kong has been in pursuit of those who led the demonstrations, which pushed for the open nomination of candidates for what was supposed to be the first direct election for the financial hub’s leader. The so-called “Umbrella Movement” – named after the mostly student demonstrators who shielded themselves from police tear gas with umbrellas – focused global attention on Chinese authorities’ efforts to constrain the local democracy movement.

Leaders of the student groups were sentenced to up to eight months in jail in 2017. More than 1,000 people were arrested during and after the sit-ins, which ended without securing any pledges to amend the Chinese government’s framework for the 2017 chief executive’s election.

The former British colony was handed over to Chinese rule in 1997 under an agreement in which China promised it could retain its own laws, economic system and civil rights for 50 years.

Since the protests, Beijing has increased its efforts to quash what it sees as the more radical element of Hong Kong’s pro-democracy camp, notably a small independence movement that gained speed after Occupy. The moves have helped fuel concerns that the city’s autonomy is slowly being eroded. DB/Agencies