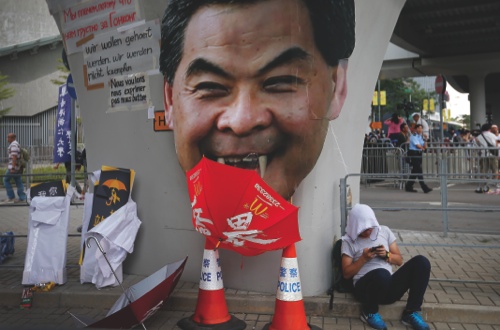 The story of Chief Executive Leung Chun-ying, Hong Kong’s top leader, is the type of rags-to-riches tale that is generally admired in this commercially-minded city. But Leung is deeply unpopular, thanks mainly to his longstanding ties with mainland China.
Beijing’s burgeoning influence in this former British colony is a key factor driving protests that have paralyzed parts of this dynamic city and brought on some of the worst confrontations in decades. Anger toward Beijing is not shared by all in Hong Kong, and the scuffles that began Friday between protesters and people trying to force them off the streets reflect widening rifts within this city of 7 million.
Protesters and their supporters have turned out by the tens of thousands at times over the past week to voice their disapproval of Leung and of plans that would require a pro-Beijing committee to screen the nomination for Hong Kong’s inaugural election for chief executive in 2017.
“We are not seeking revolution. We just want democracy,” Joshua Wong, a 17-year-
old student organizer, told a huge, youthful crowd Saturday night as they cheered and chanted “Go Hong Kong!” and “Democracy Now!”
The dissatisfaction that sparked the protests extends well beyond unhappiness with Leung and political reforms. Incomes have stagnated while living costs have soared. Hong Kong’s wealth gap is one of the world’s highest, while average incomes among those under age 24 are less than 8,000 Hong Kong dollars (about USD1,000) a month.
Many in Hong Kong believe Leung has failed to deliver on promises to raise salaries and help bring housing prices under control, and didn’t stand up for local interests against Beijing.
“The ‘one country, two systems’ model and high degree of autonomy, these promises have been adulterated in the past several years,” said Willy Lam, a politics professor at the Chinese University of Hong Kong.
Interviews with people involved in or watching the protests showed differing opinions. Some who moved to the city from mainland China sympathize with Beijing. But many others fled the Communist government and fret that Hong Kong’s Western-style freedoms and democratic aspirations are being eroded by increasing Chinese influence over the media and the economy.
“It is quite apparent to everyone that the chief executive has no credibility,” said Anson Chan, a widely respected former chief secretary — Hong Kong’s top civil service post. Chan said the independence of the judiciary, the rule of law and the rights and freedoms that were guaranteed by the agreements governing China’s takeover of the city were “rapidly disintegrating in front of our eyes.”
“What is at stake is our core values and our way of life,” Chan said in an interview in London.
Leung, better known as “CY” among Hong Kongers, sought to defuse the tensions by proposing talks between his government and the protesters. But the activists shelved the plan after they were attacked, accusing the authorities of colluding with criminal gangs to try to drive them away — a charge officials denied.
The son of a policeman, Leung went to Britain after finishing college in Hong Kong and studied to become a property surveyor. After returning home, he worked in real estate, playing a key role in the sale of land use rights that are the lifeblood of most government revenues. He is not ultra-wealthy, but his spacious home atop Hong Kong’s Victoria Peak attests to his success.
With such a background and despite his humble roots, Leung is seen as one of the many Hong Kong businessmen who have profited mightily from their ties to mainland China.
“In the final analysis, what we need is for Beijing to trust the people of Hong Kong,” Chan, the former chief secretary, said.
“If you give us ‘one-man, one-vote,’ I am absolutely certain that we will use that vote very responsibly,” she said. “We will elect a chief executive who can definitely work with Beijing but who will at the same time be seen in the eyes of the community to be speaking on Hong Kong’s behalf. We don’t see this in the current chief executive.” Elaine Kurtenbach, Hong Kong, AP

Voices from the street: Residents speak about protests

Some of Hong Kong’s 7 million residents are protective of the mostly young pro-democracy protesters. Others support the demands for wider political reforms, but have grown weary of the hassles of blocked streets and closed schools. And there are some who opposed the mass display of public dissent from the start. People spoke on Saturday about joining or watching the downtown occupation that some have dubbed the “Umbrella Revolution.”

Walter Lee, 49, computer engineer:
“I came down today because I saw the students getting beat up by gang thugs yesterday. It is the same reason why I stood in front of police on Sunday (Sept. 28) after police started throwing tear gas at the students. They are kids and we need to come out to protect them. I am also here because of my own kids, because I don’t want to live in a city where it is not possible to have peaceful protests, where you have to be afraid … every time you go out to call for democracy.”

Kong Su-lin, 75, retiree:
“I was out last night even though my grandchildren tried to stop me. I am old so the gangs don’t dare touch me. I stood between them and crossed my arms telling them not to hurt the students. I am afraid that I could’ve gotten pushed because I broke my back last year. But I hate the Communist Party, they have to be opposed. I am from Hangzhou and moved to Hong Kong with my family in 1984. My dad died in a Chinese prison. He was a talented artist and the government labelled him as a rightist and put him in jail. That’s why even though I’m old I have to come onto the streets to defend Hong Kong. If it becomes just like China, any of us can be thrown in jail and suffer for no reason at all.”

Martin Wen, 54, driver:
“I am a Hong Konger. I live in Mong Kok, and every day I need to go around the city for my work and the protests have ruined my life and income. They are spoiled brats brainwashed by Benny Tai. The roads are public and belong to 7 million of Hong Kong people, not to them. They are asking to be beaten by angry residents. I don’t have sympathy for them.” Joanna Chiu, Hong Kong, AP