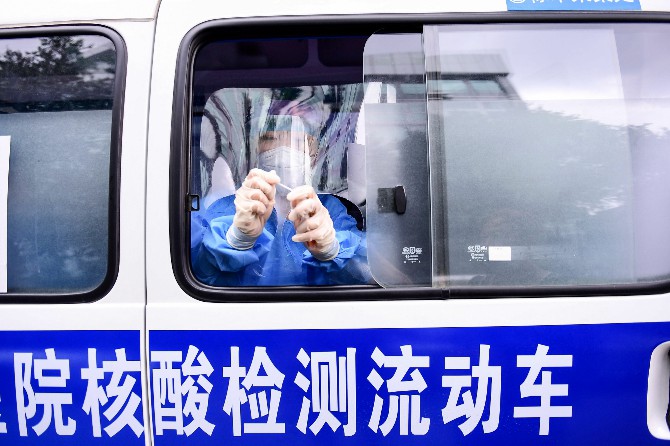 Hong Kong denied plans to harvest residents’ DNA as part of a China-backed coronavirus-testing blitz, as deep political mistrust further complicates the city’s efforts to contain its worst outbreak ever.
The Hong Kong government on Sunday welcomed Chinese government experts who are setting up a temporary laboratory to dramatically expand its ability to track a third wave of Covid-19 cases. The push quickly fanned suspicions that authorities would use the opportunity to collect DNA samples from residents, a tactic local law enforcement have recently employed in activist arrests, after widespread use by police in Xinjiang and elsewhere on the mainland.
The Hong Kong government “solemnly clarified that this is absolutely unfounded,” pledging in a statement that samples “will not be transported to the mainland for testing.” The government blamed “certain individuals” for spreading the theory online and promised to look into “whether spreading untrue claims intentionally by certain individuals would constitute criminal offense.”
The controversy underscores mounting mistrust between the government and the local pro-democracy political opposition in the wake of a national security law imposed by China in June. Last week, the government barred a dozen pro-democracy candidates from campaigning for office and delayed local legislative elections planned for Sept. 6 for a year – a move condemned by U.S. Secretary of State Michael Pompeo as an attempt to crush dissent.
State broadcaster CCTV reported on Saturday that all 7.5 million Hong Kong residents will receive free virus testing, without citing sources. The report also estimated the testing could be completed within “a few days,” though no public information has been released on how the testing drive will be conducted.
China’s National Health Commission declined comment, while the Hong Kong and Macau Affairs Office did not immediately respond to a request for comment.
Hong Kong’s appeal to mainland experts is aimed at achieving the widespread testing that helped underpin successful virus-eradication strategies in cities like Wuhan and Beijing. While there’s so far been no suggestion that those campaigns are being used for DNA harvesting, they come at a time of increased international scrutiny on the collection and use of such data by Chinese law enforcement.
China is “building the world’s largest police-run DNA database,” enrolling tens of millions of individuals with “no control over how their samples are collected, stored and used,” the Australian Strategic Policy Institute said in a report released in June. Hong Kong’s police have already begun collecting DNA samples from protesters arrested under the new national security law, a practice that lawyers described as a rare occurrence during last year’s protests.
Hong Kong democracy activist Joshua Wong, who has said he wants to hire a bodyguard to protect himself from detention after being barred from running for office, compared the testing push to Beijing’s efforts to track other groups suspected of secessionist tendencies such as the largely Muslim Uighur minority in Xinjiang.
“Starting from today, #Beijing will send medical personnel from China to #HK for mass testing. Just like #nationalsecuritylaw legislation, the decision is unilaterally imposed without public consultation,” Wong said on Twitter. “As China is paving ways to extend its surveillance systems to #Hongkong, it is worrying that HK might soon become Xinjiang.” Iain Marlow, Bloomberg