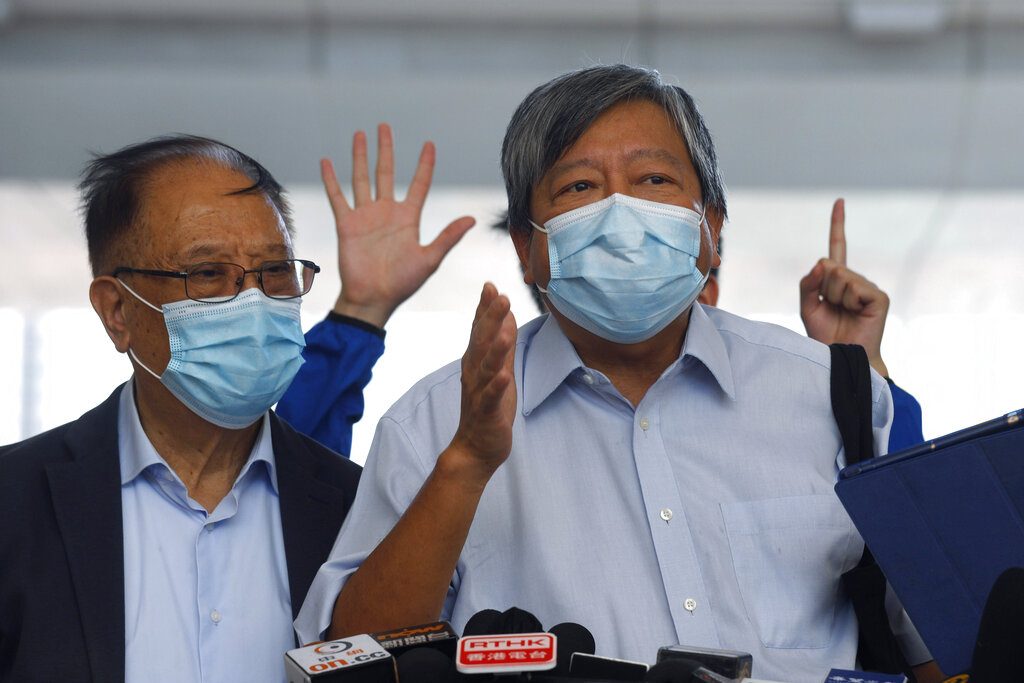 HONG KONG — At least 12 Hong Kong pro-democracy nominees including Joshua Wong were disqualified for a September legislative election, with authorities saying today (Thursday) they failed to uphold the city’s mini-constitution and pledge allegiance to Hong Kong and Beijing.
Others who were disqualified include prominent pro-democracy activist Tiffany Yuen from the disbanded political organization Demosisto, as well as incumbent lawmaker Dennis Kwok and three others from the pro-democracy Civic Party.
It marks a a setback for the pro-democracy camp, which had aimed to win a majority of seats in the legislature this year. Earlier this month, they held an unofficial primary, with candidates like Wong topping the polls.
Wong and many pro-democracy nominees had been asked to clarify their political stance earlier this week as their nominations were being reviewed.
Other nominations were still being reviewed, the government said in a statement expressing support for the disqualifications.
“We do not rule out the possibility that more nominations would be invalidated,” it said.
Earlier Thursday, Hong Kong pro-democracy activist Lee Cheuk-yan rebuked a tough national security law that Beijing had imposed following last year’s massive protests calling for greater freedoms. He criticized authorities for arresting four youths on suspicion of inciting secession via online posts.
“Hong Kong politics keeps changing,” said Lee. “Now they are using the national security law against the young people … these young people are being charged just for the things they said.”
The four, aged between 16 to 21, were detained Wednesday for announcing on social media that they had set up an organization for Hong Kong independence. An organization called Studentlocalism – which had disbanded ahead of the national security law taking effect on June 30 – said in a Facebook post that four of its former members had been arrested on secession charges.
Lee was speaking ahead of a court appearance with 14 other pro-democracy activists, including former lawmaker Martin Lee and media tycoon Jimmy Lai. The group was arrested in April over anti-government protests last year and was charged with participating and inciting others to take part in an unauthorized assembly.
Lee said that the U.N. Human Rights Committee recently affirmed that the notification of an assembly is not a requirement, and that participation in an unnotified assembly should not be a criminal offense.
“It very clearly vindicates us, we are exercising our rights,” Lee said.