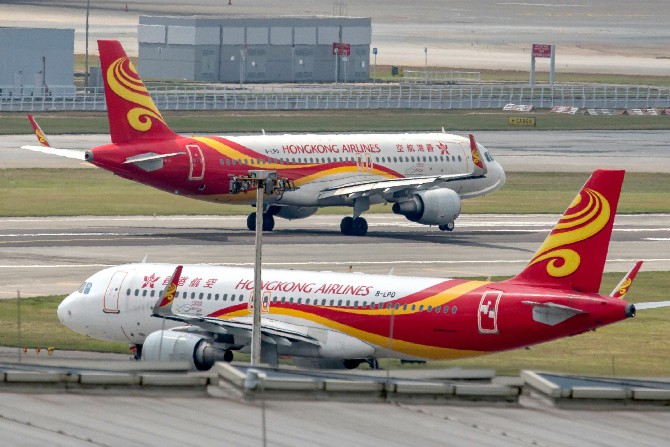 Embattled Hong Kong Airlines said it has drawn up an initial plan for a cash injection and will pay staff who had their salaries deferred, after regulators threatened to revoke its license unless the company improves its finances.
Services will gradually return to normal as soon as the funds arrive, according to an emailed statement from the company, which is backed by Chinese conglomerate HNA Group Co. Payments to staff will be made on Dec. 5, it said.
The Air Transport Licensing Authority on Monday told Hong Kong Airlines to raise more cash or risk losing its license, saying it would make a decision by Saturday. The carrier said last week it was delaying salaries for some staff and cutting more flights next year. It said months of unrest in Hong Kong had severely damaged its business as tourist numbers slumped.
Hong Kong Airlines was struggling even before anti-government protests began flaring in June. Authorities including ATLA made repeated requests for the airline to provide details on its financial situation following changes to its board of directors last year and reports of business difficulties.
The protests compounded the company’s troubles and put it on verge of becoming a high-profile corporate casualty in a downturn that’s hit peers across Asia, from Cathay Pacific Airways Ltd. to Qantas Airways Ltd. and Cebu Air Inc. Cathay, which has warned of a drop in profit in the second half and is reducing capacity, said yesterday it would lower pay rises next year to 2%, local media reported.
Retail, tourism and many other industries have also been badly hit by the social turmoil and the economy is in recession. With no sign that protesters and the Beijing-backed leadership will come to a resolution any time soon, the International Monetary Fund has called for significantly more government spending to support the city.
Closely held Hong Kong Airlines didn’t provide any more details on the cash injection plan. The carrier, Cathay’s only local competitor, ranked 24th in the SkyTrax 2019 World Airline awards and flies as far as North America and Australia with a fleet of 39 Airbus SE planes.
The airline’s troubles highlight the travel industry’s vulnerable position amid the protests. In October, arrivals from mainland China tumbled a record 46%, while visitors to Hong Kong fell 44% overall. Cathay’s shares are trading near the lowest in a decade. Will Davies & Shawna Kwan, Bloomberg