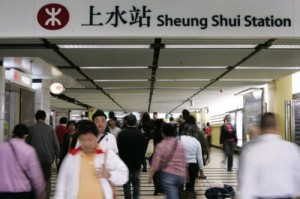 Hong Kong plans to spend at least HK$110 billion (USD14.2 billion) to build seven railways connecting outlying districts where most of the city’s population growth is projected.
The total length of railways in Hong Kong will increase by about 38 percent to more than 300 kilometers when the new lines are completed in 2031, the government said in a strategy paper on its website. Train passengers will then account for as much as half of the commuters using public transport, it said.
Building more rail lines will help support Hong Kong Chief Executive Leung Chun-ying’s plan to provide more housing in the city’s outlying districts as home prices soar to a record. The expansion may increase pressure on MTR Corp., the city’s train operator, which is struggling to complete existing projects on schedule.
“Given the limited road space in Hong Kong, we have to face the challenge of providing efficient transportation to 20 million people every day,” Secretary for Transport and Housing Anthony Cheung said at a press conference Wednesday.
Railways account for about 40 percent of public transport in the city, with more than 4.5 million passengers using them every day, the government said. The extension will bring an annual economic benefit of HK$3 billion to HK$4 billion, according to the strategy paper. Jill Mao, Bloomberg