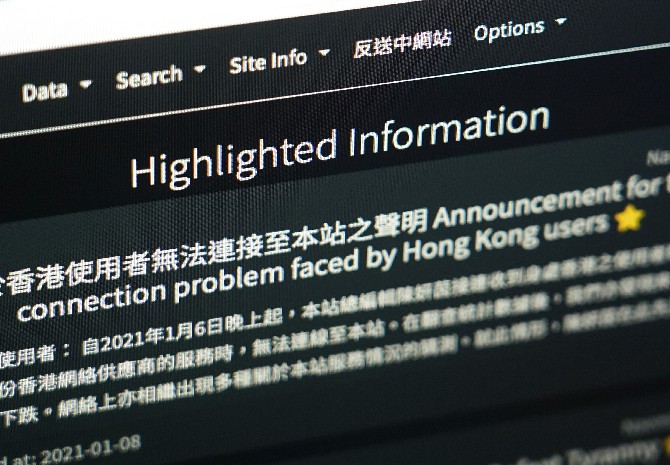 A Hong Kong internet service provider said it had blocked access to a pro-democracy website to comply with the city’s national security law.
In a statement emailed yesterday, Hong Kong Broadband Network said that it had disabled access to HKChronicles, a website which compiled information on “yellow” shops that had supported the city’s pro-democracy movement and released personal information and pictures of police and pro-Beijing supporters as part of a doxxing effort during anti-government protests in 2019.
“We have disabled the access to the website in compliance with the requirement issued under the National Security Law. The action was taken on 13 Jan PM,” the company said.
The chief editor of the site, Naomi Chan, said in a post last week that users in Hong Kong reported the site as inaccessible. Chan accused telecoms companies such as SmarTone, China Mobile Hong Kong, PCCW and Hong Kong Broadband Network of blocking the website.
China Mobile Hong Kong and SmarTone did not immediately comment. A PCCW spokesman said it had no comment on the matter.
“Naomi Chan hereby denounces ISPs that cooperate with the Chinese and Hong Kong government to restrict the citizens’ right and freedom to access information,” Chan said in a post on HKChronicles dated Jan. 7.
Chan advised Hong Kongers to “make early preparations to counter future Internet blockage at a larger scale, and to face the darkness before dawn.”
The move to block HKChronicles has intensified concerns that Beijing is asserting more control over the city and breaking its promise of letting the former British colony maintain separate civil rights and political systems for 50 years after the communist-ruled mainland took over in 1997.
It has also prompted fears that internet freedoms in Hong Kong could be curtailed, akin to the “Great Firewall of China,” a system of internet censorship on the mainland which blocks foreign search engines and social media platforms like Google, Facebook and Twitter and scrubs the internet of keywords deemed sensitive by the Chinese government.
Glacier Kwong, a digital rights and political activist based in Germany, wrote in a Twitter post last week that Hong Kong has “abused legal procedures and other means to hinder the freeflow of info online” in the last 18 months.
“The Hong Kong government is stifling Hong Kong people’s freedom on the Internet,” she wrote in another tweet. “An open Internet has always been the cornerstone of freedom in a place. Disrupting Internet freedom also undermines the flow of information, freedom of communication, and freedom of the press.” ZEN SOO, HONG KONG, MDT/AP