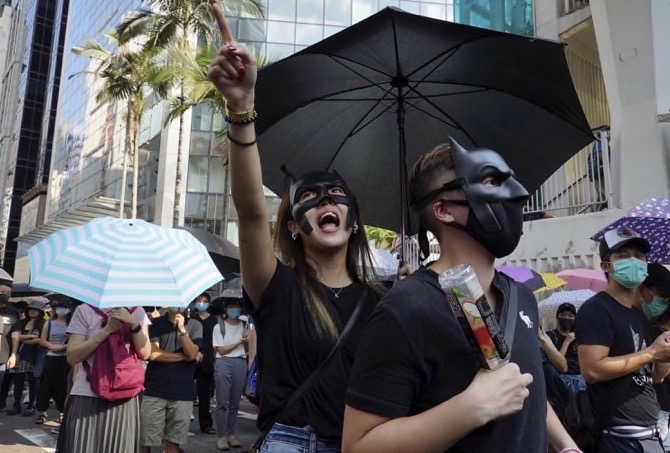 A group of pro-democracy Hong Kong legislators filed a legal challenge against the government’s use of a colonial-era emergency law to criminalize the wearing of masks at rallies to quell anti-government demonstrations, which diminished in intensity but didn’t stop.

The mask ban that went into effect at midnight Friday triggered an overnight rash of widespread violence and destruction in the semi-autonomous Chinese territory, including the setting of fires and attacks on an off-duty police officer who fired a live shot in self-defense that wounded a 14-year-old.

Two activists failed to obtain a court injunction Friday against the ban on face coverings that the government says have made it tough for police to identify radical protesters.

“This is a Henry VIII situation. This is basically I say what is law […] and I say when that ceases to be law. That’s not how our constitution works,” Kwok told a news conference late Saturday. “We say that she doesn’t have such powers, that she cannot avoid” the Legislative Council.

Lawmaker Claudia Mo called the Emergency Ordinance a “weapon of mass destruction” that could pave the way for more draconian regulations.

Kwok said the group also asked the court to rule that the emergency law, enacted by British colonial rulers in 1922 to quell a seamen’s strike and last used in 1967 to crush riots, was incompatible with rights and freedoms under Hong Kong’s constitution that was put in place after it returned to Chinese rule in 1997.

Face masks have become a hallmark of protesters in Hong Kong, even at peaceful marches, amid fears of retribution at work or of being denied access to schooling, public housing and other government-funded services. Some young protesters also wear full gas masks and goggles to protect against tear gas. Many are concerned their identities could be shared with the massive state-security apparatus that helps keep the Communist Party in power in mainland China, where high-tech surveillance including facial recognition technology is ubiquitous. 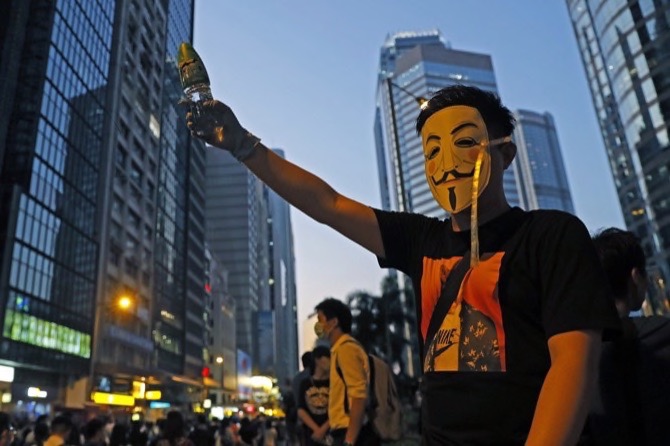 Lam’s ban applies to all public gatherings, both unauthorized and those approved by police. It makes the wearing of any face coverings, including face paint, punishable by one year in jail. A six-month jail term could be imposed on people who refuse a police officer’s order to remove a face covering for identification. Masks will be permitted when wearers can prove they need them for work, health or religious reasons.

“Will they arrest 100,000 people on the street?” said a protester who gave his surname as Lui. “The government is trying to intimidate us, but at this moment, I don’t think the people will be scared.”

In a televised address broadcast as protesters again marched in masks on Saturday, a solemn Lam described Hong Kong as “semi-paralyzed” and reiterated the mask ban was needed to stop the violence. Many malls, shops and the entire MTR network of subways and trains that usually handles more than 4 million trips a day shut Saturday following the overnight rampage.

“The government needs to take drastic measures to say no to violence, restore peace in society, protect citizens’ right to continue their daily lives and freedom, not allowing a small group of rioters to destroy it,” Lam said.

Lam said the mask ban would be “an effective deterrent to radical behavior.”

“We must save Hong Kong — the present Hong Kong and the future Hong Kong,” she said. “We must stop the violence. … We can’t just leave the situation to get worse and worse.”

Lam said she would seek the legislature’s backing for the ban later. She insisted Hong Kong was not in a state of emergency but wouldn’t rule out a further toughening of measures if violence continued. She also bristled at a suggestion that the mask ban nudged the territory closer to authoritarian rule.

She said she was not acting under orders from Beijing, which she visited this week when Communist Party leaders celebrated 70 years in power on Tuesday. But Yang Guang, a Chinese spokesman for Hong Kong affairs, expressed support late Friday, saying it was time for stern measures to end the conflict.

Many peaceful protesters say violence has become a means to an end, the only way for young masked protesters to force the government to bend to clamors for full democracy and other demands.

But the shooting of the teen Friday night — the second victim of gunfire since the protests began in early June — stoked fears of more bloody confrontations. An 18-year-old protester was also shot at close range by a riot police officer on Tuesday.

Police said in a statement Saturday that the 14-year-old, who was hospitalized with a gunshot wound on his thigh, was arrested for participating in a riot and assaulting a policeman. Police have said they are still investigating exactly how he got shot.

A Hospital Authority spokesman said the teen was in serious but not critical condition.

Protesters in masks popped up in the central business district Saturday afternoon, carrying a yellow banner marked “Glory to Hong Kong” and shouting, “Hong Kong, resist!” There were other scattered gatherings, with some holding hands in a long human chain and chanting anti-police slogans in an open-air stadium. 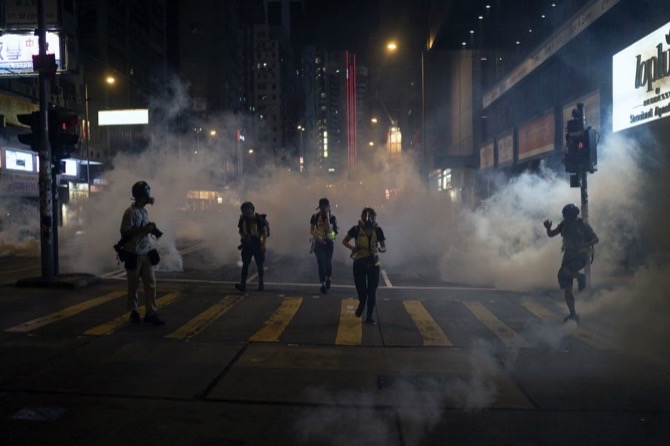 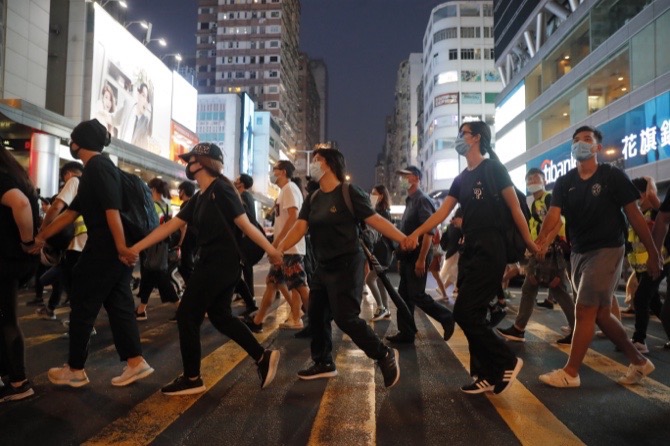 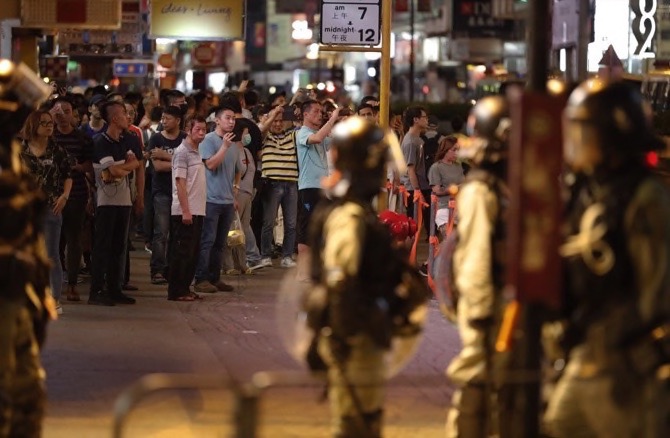 Trouble brewed at night, however, with police saying pockets of protesters again blocked roads and vandalized shops and public property in several districts but left before police arrived.

Police said no arrests had been made so far on the anti-mask ban but didn’t explain why.

Protester numbers Saturday appeared down from previous weekends when tens of thousands flooded the streets. Some marchers said the protest movement that has become a big headache to Chinese President Xi Jinping was merely harboring strength for the long haul.

But the extensive violence has turned some to the government’s side, even though they blamed Lam for sparking the protest movement with a now abandoned bill that would have allowed criminal suspects to be extradited for trial in Communist Party-controlled courts in mainland China.

“There is outright rioting,” said retiree Peter Tai, 67, stocking up on groceries for fear they’d become hard to find.

“Protesters want democracy and freedom, but don’t they have freedom now? People can go anywhere and do things freely,” he said. “Freedom is more valuable than democracy. I hope these young people don’t do things they’ll regret forever.” MDT/AP