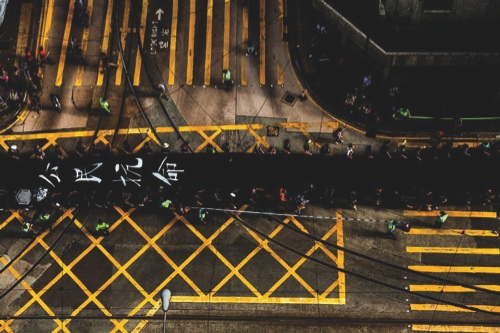 Hong Kong’s leader called for “good sense” on changes to the city’s political system, as activists began a march protesting China’s decision to vet candidates for the first popular elections in 2017.
Constitutional reform in Hong Kong should move forward, “whatever the pace,” Chief Executive Leung Chun-ying said in a “Letter to Hong Kong” aired yesterday on Radio Television Hong Kong. The city’s people are ready for democracy, even as Hong Kong faces a “big challenge” in passing the necessary legislation, he said, according to a government transcript of his remarks.
China’s lawmakers ruled last month that candidates for Hong Kong’s next leader must be screened by a committee, angering pro-democracy legislators in the city who promised to veto the plan when it’s presented to them. Occupy Central With Love and Peace, an activist group, has threatened to stage a mass occupation to disrupt the city’s financial district.
“Politics is the art of the possible,” Leung said ahead of yesterday’s Occupy Central march. “I hope the good sense of Hong Kong people will prevail.”
Occupy Central supporters began marching toward the city’s financial district in the afternoon, holding large black cloth banners emblazoned with Chinese phrases including “civil disobedience” and “the government has broken their promise.” The group wants “to tell the world how Hong Kong people have been betrayed,” according to an e-mailed statement yesterday.
Promises made by the Chinese central government “have never been fulfilled and democracy in Hong Kong is stifled,” Occupy Central said in the release. The demonstrators, wearing black clothes and yellow ribbons, include members of the Hong Kong Federation of Students, Justice and Peace Commission of the Hong Kong Catholic Diocese, Labour Party, the Democratic Party and other organizations, according to the release.
Tension in the city ratcheted up after the Chinese government issued a white paper June 10 saying Hong Kong’s autonomy isn’t an inherent power and its leader and court judges must be patriots. The document prompted an angry reaction from pro-democracy parties, former officials and lawyers.
Uncontested elections for the Hong Kong chief executive won’t be allowed, and “we can expect keen competition” among candidates, according to Leung, whose current term ends in 2017. Nomination procedures will be discussed as part of a new round of public consultation that will start soon, he said yesterday.
Leung has pledged to introduce the universal suffrage bill to the city’s legislature early next year. To become law, it will require two-thirds of the 70-member body to support it, meaning its passage could be halted by the 27 opposition members.
If the proposal is rejected, Hong Kong will continue to have its leader picked by a 1,200-member election committee.
A lawmaker delegation led by Democratic Party Chairman Emily Lau left yesterday on an eight-day trip to northern Europe, according to a government press release. It will inform parliaments in Finland, Norway and Denmark of the latest developments in Hong Kong and exchange views on political development, the release shows.
Other opposition legislators, including the Democratic Party’s James To and Labour Party’s Cyd Ho, are also among the 10 members of the group. Their itinerary includes lunch with the Finnish parliament’s Constitutional Law Committee, dinner with Norway’s foreign ministry and a visit to Danish confectioner Peter Beier Chokolade AS. Natasha Khan, Bloomberg

Defying yesterday’s scorching heat, hundreds of Occupy Central protesters – many of them dressed in black – marched from Causeway Bay to Central, the South China Morning Post reported.
“Beijing has failed to fulfil its promise that Hong Kong people can have democracy,” said Benny Tai Yiu-ting, co-founder of the Occupy Central movement.
According to the paper, unlike at past pro-democracy demonstrations in the city, the protesters did not chant any slogans. They remained silent to show that this was a “solemn” protest against Beijing.
As the protesters arrived at Admiralty, Occupy Central co-founder, Reverend Chu Yiu-ming, said that about 4,000 had taken part in the march, SCMP stated. Police later said 1,860 protesters took part.