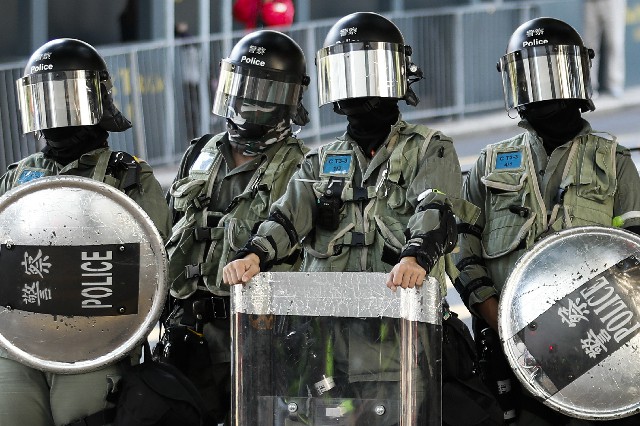 Thousands of people took to Hong Kong’s streets yesterday in a new wave of pro-democracy protests, but police fired tear gas after some demonstrators hurled bricks and smokes bombs, breaking a rare pause in violence that has persisted during the six-month-long movement.
In the largest of three rallies, a key thoroughfare along the waterfront on the Kowloon side of Victoria Harbour was packed with demonstrators, from hardened masked protesters in all-black outfits to families and the elderly. They chanted “Five demands, not one less” and “Disband the police force” as they marched.
That rally followed two other marches earlier yesterday as protesters sought to keep the pressure on city leader Carrie Lam after the recent win by the pro-democracy camp in district council elections and the gaining of U.S. support for their cause.
“If we don’t walk out, the government will say it’s just a youth issue, but this is a Hong Kong problem that affects all of us,” Lily Chau, 30, said as she pushed her toddler in a stroller at the march in Kowloon. “If we are scared, the government will continue to trample on our rights.”
Police estimated that 16,000 people attended the Kowloon rally.
Slogans spray-painted along walls and on sidewalks reminded the crowd that “Freedom is not free” and pledged “Victory at all costs.”
The Kowloon march was cut short after riot police fired tear gas and arrested a few people. A police statement said minimum force was deployed after “hundreds of rioters hurled smoke bombs” and bricks.
Marchers berated police as they scrambled to flee the tear gas, shouting “Dirty cops” and “Are you trying to kill us?” Some protesters dug up paving stones and threw them on the street to try to slow the police down.
More tear gas was fired at night after dozens of hardcore protesters set up roadblocks and vandalized some shops and restaurants linked to China. 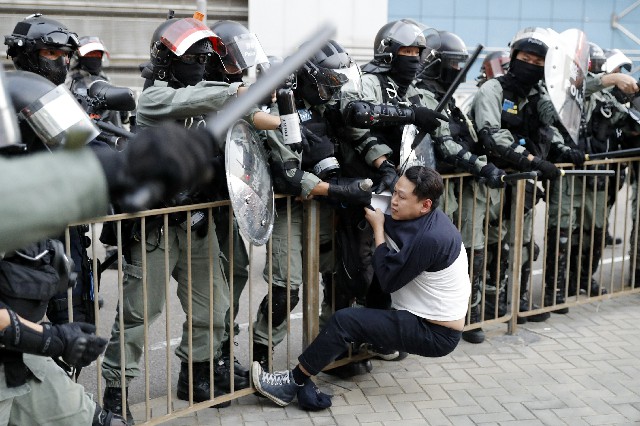 Hong Kong’s protests have been relatively peaceful during the two weeks around the Nov. 24 elections, but yesterday’s disruption indicated there may be more violence if Lam fails to yield to protesters’ demands.
Tensions started Saturday night after police used pepper balls against protesters and a man was hit in the head by an unidentified assailant while clearing the street.
Lam has said she’ll accelerate dialogue but has refused to offer any new concessions since the elections. Her government has accepted only one demand — withdrawing extradition legislation that would have sent suspects to mainland China for trial.
Elaine Wong, an office worker who was at the Kowloon march, called the recent election win “an empty victory.”
“We have in actual fact not won any concessions for our demands,” she said. “We must continue to stand out to remind the government of our unhappiness.”
The two earlier marches yesterday appealed to President Donald Trump for help and demanded that police stop using tear gas.
Waving American flags, black-clad protesters marched to the U.S. Consulate to thank Trump for signing into law last week legislation supporting their cause and urged him to swiftly sanction Lam and other officials for suppressing human rights.
Some held banners reading “Let’s make Hong Kong great again” — a riff on Trump’s 2016 campaign pledge to make America great again. One showed him standing atop a tank with “Trump” emblazoned on the front and side.
At the other small rally, a peaceful crowd of about 200 adults and young children marched to government headquarters in the morning and chanted “No more tear gas.”
“A lot of parents are worried that their children are affected, because their children are coughing, breaking out in rashes and so forth,” said social worker and march organizer Leo Kong.
In Geneva, China accused the U.N. high commissioner for human rights, Michelle Bachelet, of emboldening “radical violence” in Hong Kong.
In an opinion piece published Saturday in Hong Kong’s South China Morning Post newspaper, Bachelet called for an “independent and impartial judge-led investigation into reports of excessive use of force by the police.”
She also said that Lam’s government must prioritize “meaningful, inclusive” dialogue to resolve the crisis.
China’s U.N. mission in Geneva said the article interferes in China’s internal affairs and exerts pressure on Hong Kong’s government and police, which “will only embolden the rioters to conduct more severe radical violence.”
It said Bachelet made “inappropriate comments” on Hong Kong’s crisis and that the Chinese side had lodged a strong protest in response. EILEEN NG, AP 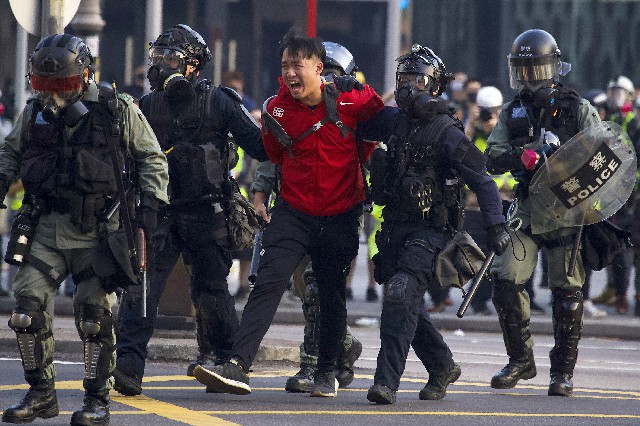