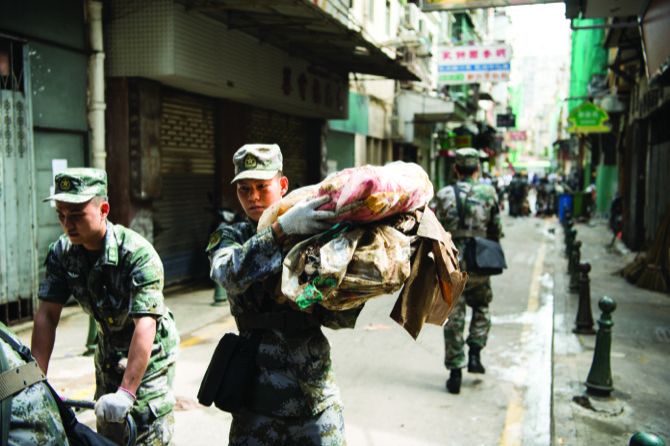 Over 400 soldiers from the Hong Kong garrison of the People’s Liberation Army were quietly deployed for the first time on the weekend to help remove trees felled in country parks during the passage of Typhoon Mangkhut last month.

The soldiers joined staff from Beijing’s Office of the Commissioner of the Ministry of Foreign Affairs in Hong Kong and hundreds of employees of state-owned enterprises to clean up a 100-kilometer hiking trail.

Typhoon Mangkhut struck the coastal areas of Guangdong Province and the two special administrative regions on September 16, more than four weeks ago. According to Hong Kong authorities, the typhoon felled more than 46,000 trees as it passed by the city, many of which remain uncleared.

The PLA garrison in Hong Kong may be deployed upon request of the Chief Executive and after approval from central authorities. The garrison is required to return to its barracks immediately after the operation’s conclusion. In the case of last weekend the Hong Kong government says it did not request such assistance.

According to the South China Morning Post, Secretary Matthew Cheung tried to explain the situation as voluntary community service, adding that local authorities had not requested it.

The newspaper cited the Hong Kong official as saying that residents of the city of 7.5 million should not “read too much into” the involvement of the PLA as it was “intended for Hong Kong’s good.”

“The [Hong Kong] government did not interfere with their activity. We did not play any role,” Cheung said, according to the SCMP. “Our police, disciplined services, and our colleagues also took part in voluntary services. These things happen, so do not read too much into this. The government did not ask the PLA for help.”

Meanwhile, the government said that the clean-up efforts did not represent an official call for assistance, but rather a volunteer effort organized by the Liaison Office. It remains unclear whether the Office was in communication with the local government regarding the deployment, as Hong Kongers were not warned in advance.

The deployment of the PLA garrison for initiatives other than “community services” has not occurred before in Hong Kong.

It follows a similar deployment in Macau last year in the aftermath of Typhoon Hato, when Chief Executive Chui Sai On requested assistance from the garrison to help clean the streets and expedite the restoration of public services.

In Macau, the assistance extended by the PLA garrison in the aftermath of Hato was generally well received by locals, even as it sparked concern in neighboring Hong Kong. The deployment was conducted within a few days of Hato making landfall and lasted for about 48 hours.