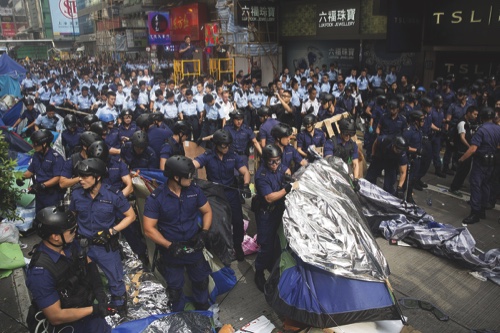 Police arrested key student leaders of Hong Kong’s pro-democracy protests yesterday as they cleared barricades in one volatile district, throwing into doubt the future of a 2-month-old movement seeking free elections in the former British colony.
On the second day of the operation to clear one of three protest zones, police in helmets swiftly removed metal barricades, tents, canopies and other obstructions in Mong Kok, a crowded, blue-collar neighborhood that has been the flash point of earlier clashes.
The two remaining protest zones are the sprawling main camp next to government headquarters on the edge of the financial district and a smaller one in the Causeway Bay shopping district.
Many protesters scattered during the police clearance yesterday, but a handful faced off briefly against dozens of officers on a side street, determined to await supporters that they expected would join them in the evening after getting off school or work.
Mong Kok has been home to a more raucous and aggressive group of protesters than at the two other sites. Previous efforts to clear the area have backfired, sending more people into the streets in the evening to confront police.
Police spokesman Steve Hui said a total of 148 people were arrested, including 55 for contempt of court and obstructing officers carrying out the court-ordered barricade removals over two days. In chaotic pepper spray-fueled clashes that ensued after Tuesday’s barricade removal, police arrested 93 more for resisting arrest, disorderly conduct, unlawful assembly and possessing offensive weapons.
Among those arrested were protest leaders Joshua Wong, the 18-year-old head of the Scholarism group, and Lester Shum, deputy secretary general of the Hong Kong Federation of Students.
“After the clearance operation we don’t have a leader,” said protester Ken Lee, 19, who quit his job at a restaurant in October after the protests erupted and spent his days in Mong Kok. “We need to wait until tonight, it all depends on what happens tonight, if the majority of the people want to reoccupy the area or go to another location.”
The protesters are demanding that Hong Kong’s government scrap a plan mandated by China’s Communist leaders to use a panel of Beijing-friendly elites to screen candidates for the territory’s top leader in inaugural 2017 elections. The arrest of the student leaders could reinvigorate the protest movement, which has been losing steam as the Hong Kong government’s apparent strategy of waiting out the protesters left them with few options.
Organizers estimated that as many as 200,000 people took to the semiautonomous Chinese city’s streets at the start of the protests, but numbers have since dwindled sharply, along with public support.
In the latest push, police were acting to enforce a court injunction granted to taxi drivers to remove obstructions along Mong Kok’s Nathan Road. Cleanup crews piled up junk left behind by the protesters and the road gradually opened up to traffic and pedestrians later yesterday. Kelvin Chan , AP

Benny Tai, a co-founder of activist group Occupy Central With Love and Peace, said the government needs to find a political solution to end the protests. “Whether the police can successfully clear the streets, I think it cannot solve the political problem that has caused the occupation,” Tai told reporters. “It is the responsibility of the government to take a positive attitude to solve the political problem rather than relying on the police or court orders to clear the streets.”