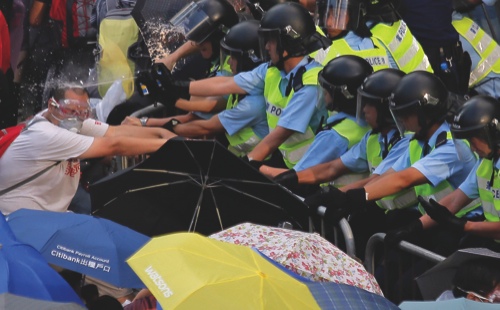 Thousands of Hong Kong pro-democracy demonstrators defied tear gas and pepper spray to occupy the city center, as police undertook the biggest crackdown since the city returned to Chinese rule.
Police held up warning signs saying “Disperse or We Fire” before lobbing tear-gas canisters in the Admiralty district near the main government offices, briefly scattering protesters. The demonstrations spilled outside the government plaza, with thousands of protesters blocking traffic on Connaught Road, one of the main thoroughfares that feeds Central, the city’s business district.
“This is a new age, a new era of disobedience,” Benny Tai co-founder of the Occupy Central with Love and Peace protest group said in an interview yesterday from the protest site. “This is totally out of my expectation. This is people occupying Hong Kong.”
Pro-democracy demonstrators say that China is reneging on its promise to maintain the city’s independence under its “one country, two systems” pledge agreed when British colonial rule ended almost 20 years ago. The showdown was spurred by the Chinese government’s decision last month that candidates for the 2017 election of chief executive, the city’s leader, be vetted by a committee, a system designed to produce a new leader effectively handpicked by the government in Beijing.
The police crackdown was the most violent since the start of Chinese rule of the city in 1997.
“Heavy-handed approaches to the students will surely backfire,” said Michael Davis, a law professor at the University of Hong Kong. “Hong Kong people have proven time and time again that if the government handles public concerns badly, the public will mobilize against them.”
The protests initiated by student groups on Friday spread after leaders of Occupy Central brought forward plans for their mass sit-in, aimed at paralyzing the city’s business district. Occupy had signaled it would hold its protest on Oct. 1, a public holiday marking Chinese national day, before changing course after thousands took to the street to support the student-led demonstrations outside the main government building.
Rounds of tear gas failed to deter protesters who faced off against police in riot gear with shields. Volunteers lined up in human chains to hand out bottles of water, bread and fruit, as well as plastic wrap, facial masks, goggles and umbrellas as protection against pepper spray.
“We didn’t use any violence, and we restrained ourselves during the process,” said Eason Chung, a member of the Hong Kong Federation of Students. “Yet this unfeeling administration was unmoved and didn’t heed the people’s voice. Instead it attacked the people instead of talking to us.”
Police have made at least 74 arrests and at least 34 people were injured in skirmishes Saturday, according to official statements.
Hong Kong Chief Executive Leung Chun-ying, in his first public appearance since the protests began, said he would be willing to talk with demonstrators.
“We are willing to talk to anyone with the understanding that the political reforms can move forward so we can achieve universal suffrage by 2017,” he said at a press conference in Hong Kong.
China said last month that candidates for the 2017 leadership election must be vetted by a committee, angering pro-democracy campaigners who say the group is packed with business executives and lawmakers who favor Beijing. Both the students and the Occupy Central movement share the goals of universal suffrage with no pre-screening of candidates.
Leung signaled that the Chinese government would not compromise on its plans for the vote.
The Standing Committee of the Communist Party’s decision on the election procedure was made “after detailed and careful deliberation of the actual situation of Hong Kong and the views of various sectors of the community. It is legally binding.”
Activists from Occupy Central have long threatened a sit-in in the nearby business district as part of efforts to pressure China’s government to allow a more open election in the former British colony.
The current rally was started Friday by students who boycotted classes and escalated when some climbed over fences and clashed with police in riot gear, who dragged some of the protesters away.
Numbers swelled Saturday night as thousands converged on the scene before Occupy Central leaders joined them to declare the start of its own action. The group demanded that Chief Executive Leung submit a new political reform report to China or face an escalation of action.
Next Media Ltd.’s Chairman Jimmy Lai, who owns the pro-democracy Apple Daily, and Martin Lee, 76, the founding chairman of the Democratic Party, were among those on the site. Both men, decked in raincoats and goggles, were seated cross-legged at the front of a bunch of students at the entrance of the Legislative Council parking garage entrance.
“We will be here for as long as it takes,” Lai told reporters. “We’re seeking a free society, not to be cowards. I’m a Hong Kong citizen, so I’m out here doing my part.”
Speaking on the prospect of being arrested, Lee said it’s a risk they had to take.
“Say a prayer for us,” he said.
At a meeting in Beijing last week with Hong Kong tycoons including the city’s two richest men, Li Ka-shing and Lee Shau-kee, Chinese President Xi Jinping said that China “unwaveringly” supports Hong Kong’s democratic development, prosperity and stability.
The Chinese government agency that handles Hong Kong affairs condemned the protests.
“China’s central government firmly opposes illegal acts taking place in Hong Kong,” and fully supports the local government in handling the matter according to the law, the official Xinhua News Agency quoted the Hong Kong and Macau Affairs Office of the State Council as saying.
“We have to tell the Beijing and Hong Kong governments that we are angry with their decisions,” lawmaker Albert Ho said at the protest site. “We have to let them know.” Bloomberg 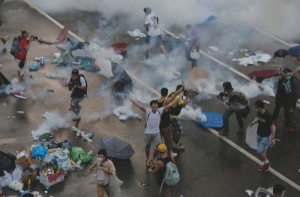 Hong Kong police used tear gas yesterday and warned of further measures as they tried to clear thousands of pro-democracy protesters who had gathered outside government headquarters in a challenge to Beijing over its decision to restrict democratic reforms for the semiautonomous city. The searing fumes sent demonstrators fleeing down the road, but many came right back to continue their protest.
Authorities launched their crackdown after the rally spiraled into an extraordinary scene of chaos as the crowd jammed a busy road and clashed with officers wielding pepper spray.
Police officers in a buffer zone manned barricades and doused the protesters with pepper spray carried in backpacks. The demonstrators, who tried at one point to rip apart metal barricades, carried umbrellas to deflect the spray by the police, who were wearing helmets and respirators. 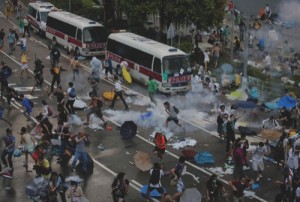 The demonstrations — which Beijing called “illegal” — were a rare scene of disorder in the Asian financial hub, and highlighted authorities’ inability to rein in the public discontent over Beijing’s tightening grip on the city.

After police used the tear gas, the protesters chanted “Shame on C.Y. Leung,” referring to the city’s deeply unpopular Beijing-backed leader. To many, it seemed to mark a major shift for Hong Kong, whose residents have long felt their city stood apart from mainland China thanks to its guaranteed civil liberties and separate legal and financial systems. AP 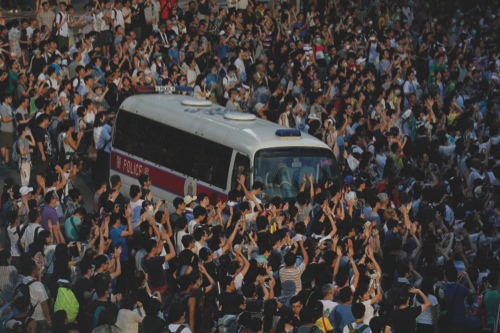 A police car is blocked by the crowd 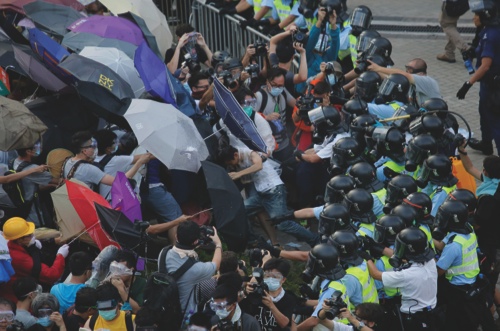 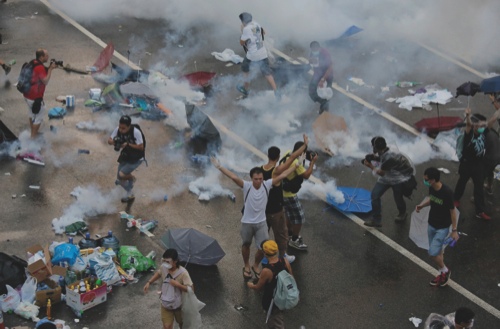 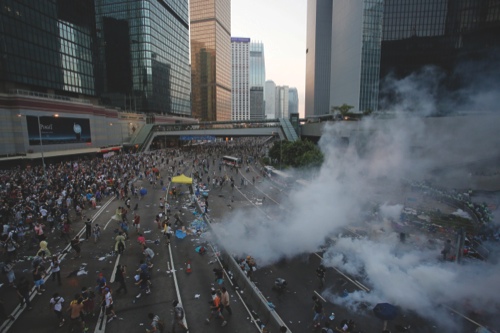 “This is a new age, a new era of disobedience”, Benny Tai, co-founder, Occupy Central