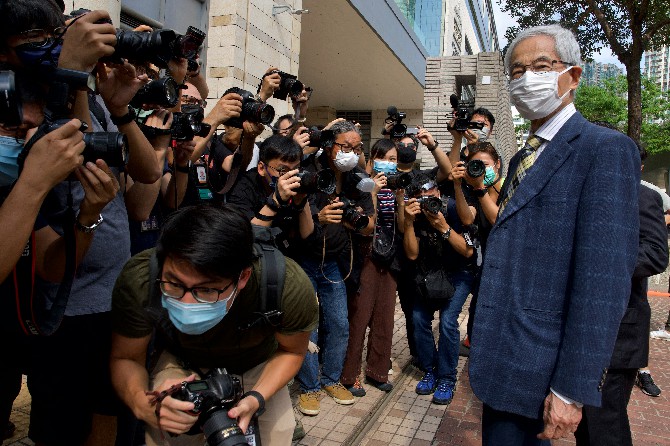 Seven of Hong Kong’s leading pro-democracy advocates, including a media tycoon and an 82-year-old veteran of the movement, were convicted yesterday for organizing and participating in a march during massive anti-government protests in 2019 that triggered a crackdown on dissent.
Jimmy Lai, the owner of the outspoken Apple Daily tabloid; Martin Lee, the octogenarian founder of the city’s Democratic Party; and five former pro-democracy lawmakers were found guilty in a ruling handed down by a district judge. They face up to five years in prison. Two other former lawmakers charged in the same case had pleaded guilty earlier.
According to the ruling, six of the seven defendants convicted, including Lee and Lai, carried a banner that criticized police and called for reforms as they left Victoria Park on Aug. 18, 2019, and led a procession through the center of the city. The other defendant, Margaret Yee, joined them on the way and helped carry the banner.
Police had given permission for a rally at Victoria Park but had rejected an application from the organizer, the Civil Human Rights Front, for the march.
Organizers estimated that 1.7 million people marched that day in opposition to a bill that would have allowed suspects to be extradited to mainland China. MDT/AP