Hong Kong | The brutal truth for bankers is they’re expendable

What happens to a global financial center when hundreds of thousands of residents head for the door? The jury is still out on London after its Brexit- and pandemic-inspired exodus. Now it’s Hong Kong’s turn to pose the question.The U.K. starts taking applications as of Jan. 31 under a new immigration program for Hong Kong residents, introduced in response to a national security law that was enacted by China’s legislature last June. The British government calls the law a “clear and serious breach” of the Joint Declaration that governed the former colony’s return to Chinese sovereignty in 1997, which guaranteed that Hong Kong’s rights, freedoms and way of life would remain unchanged for 50 years.The numbers are staggering. The U.K.’s central case is for 321,600 visa applications over the coming five years, with a high-end estimate of 1.05 million, equal to 14% of Hong Kong’s 7.5 million population.

Money is already leaving, with Bank of America Corp. estimating that emigration-related outflows to the U.K. alone could reach $36 billion this year, Denise Wee and Katharine Gemmell of Bloomberg News reported last week. Ordinary savers have been alarmed by reports of banks freezing the accounts of pro-democracy activists and family members under the security law, which was imposed on Hong Kong without debate in the city’s legislature, they wrote.

That looks disquieting, until set in the context of Hong Kong’s overall bank deposits, which totaled $14.6 trillion at the end of November (the most recent date for which data are available). On that basis, an outflow of $36 billion would amount to barely a quarter of 1%.

To drive home why capital flight shouldn’t be a concern, at least in current conditions, consider this: Hong Kong bank deposits fell by more than $1 trillion from the end of October without even a murmur of distress on financial markets.

This was largely a product of the $35 billion Ant Group Co. initial public offering, which caused subscription funds to flow in and then to exit when Chinese regulators aborted the world-record sale. Amid such capital volatility, measures of interbank liquidity remained as calm as a pond, with the Hong Kong Monetary Authority’s aggregate balance sticking close to a record high and the one-month Hong Kong interbank offered rate ending November at a rock-bottom 0.1%. The Hang Seng Index, the city’s benchmark stock gauge, rose 9.3% during the month.

This dog that didn’t bark points to a brutal truth for departing London and Hong Kong banking industry workers:Financial centers arise in response to wider economic forces, and these far outweigh the attributes of a city’s workforce — however sophisticated, well qualified and international in outlook they may be. Hong Kong developed into a financial center to intermediate China’s need for capital and the world’s desire for returns. As long as that role still exists — and it very much does — then Hong Kong will remain relevant.

That doesn’t mean that an exodus on the scale envisaged will be damage-free. In London, rents have taken a hit from the departure of non-U.K. residents, as Bloomberg Opinion’s Marcus Ashworth and Stuart Trow wrote last week. For Hong Kong, too, property could be a point of vulnerability.

In an impact assessment in October, the U.K.’s Home Office projected a central estimate of 179,300 main applicants for the five years through 2025. The figure, which excludes dependents, was based on the then-current trend of applications for British Nationals (Overseas) passports (a preliminary step before joining the visa program) continuing through to the end of 2020. Most of those applying for BN(O) passports are likely to emigrate, and therefore can be expected to sell any property they may own in Hong Kong.

That’s a lot of potential selling pressure. To illustrate, the chart below maps the U.K.’s mid-point estimate for annual visa applications in 2021-2025 to Hong Kong’s residential property transaction volumes over the past five years. 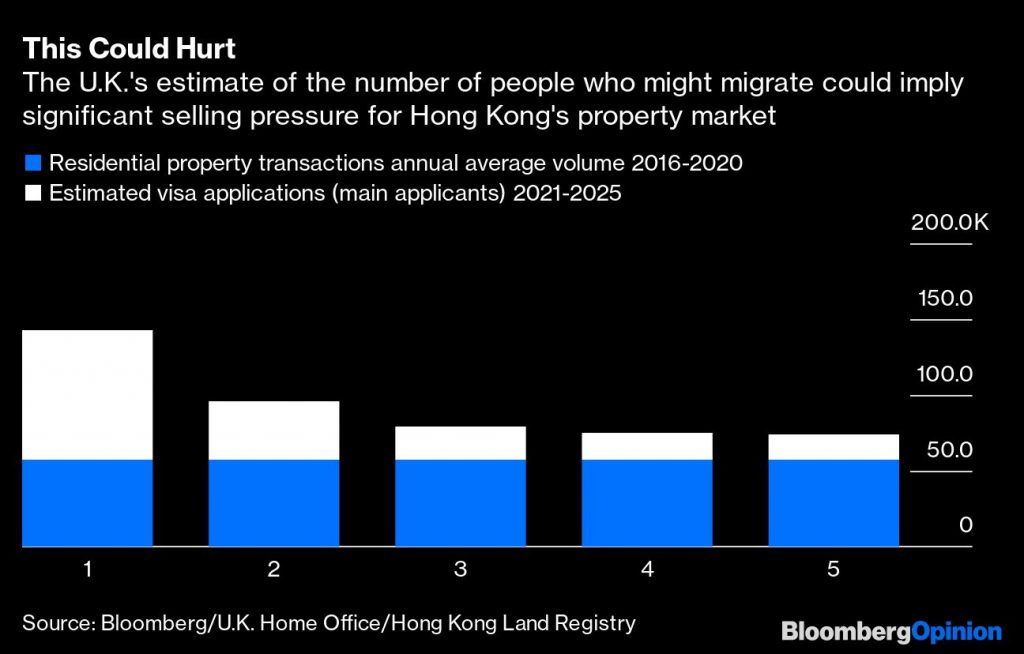 The 2021 projection of 85,500 applicants is almost 50% higher than the average annual volume of Hong Kong home sales over the past five years. The number is seen tapering off in subsequent years, but this is only the central estimate. The U.K. government’s highest forecast is 278,600 main applicants in 2021, and a total of 584,600 for the five-year period. The low-end forecast is 2,500 this year and a five-year total of 5,300.

That’s a wide range, to put it mildly; the Home Office notes that there is “significant uncertainty” over the volume of people who may take up the visa. Still, the low forecast looks the most wildly unlikely of the three.

To see why, look at the trend in BN(O) passports. The number of holders surged to 612,000 as of August, from 167,000 in July 2019. There’s little reason to get a BN(O) passport now unless you plan to emigrate — for traveling, a Hong Kong passport serves just as well. So the 445,000 people who obtained them in the year through August are more likely than not to leave the city.

This prospective overhang may be one reason why Hong Kong’s home prices have failed to recover over the past several months, even as interest rates have declined and the Hang Seng Index has rallied by more than a quarter from its September low.

A crash is unlikely, not least because the wider economic forces are favorable for Hong Kong asset prices right now. Besides low borrowing costs, the U.S. dollar is on a steady downward trend (a boon for a city with a pegged exchange rate), and China’s rebounding economy has been the standout performer during the pandemic. Economic conditions may change. At the moment, though, emigration looks more like a damper for Hong Kong property prices than a potential crisis trigger.

All of this begs the question of why the Chinese government has been so sensitive about the prospect of widespread departures. Beijing has attacked Britain’s visa offer and, in retaliation, the foreign ministry said Friday that it will stop recognizing BN(O) passports as valid travel documents. A Hong Kong government adviser last week suggested banning residents from holding dual passports.

Ultimately, the real damage of Hong Kong’s looming exodus is reputational and political rather than financial and economic. Once again, it raises the specter of a Communist government resorting to threats and coercion to keep citizens within its borders. That’s another own goal in China’s long pursuit of soft power. A more productive approach would be changes in government policies that make it more attractive for people to stay. That doesn’t appear to be in the cards.
By Matthew Brooker, MDT/Bloomberg