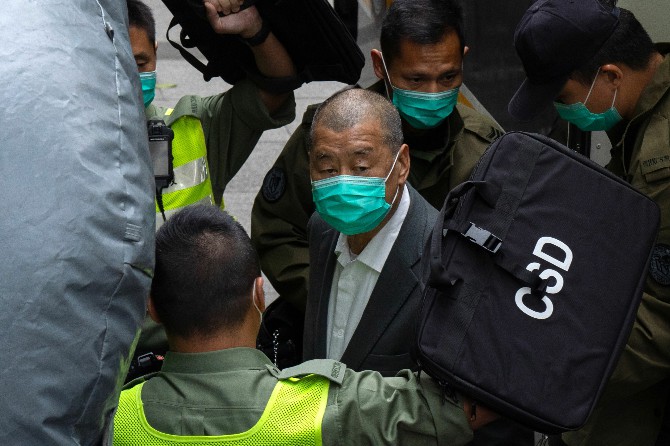 Hong Kong will freeze the assets of media tycoon and pro-democracy activist Jimmy Lai under its controversial national security law, the latest move to crack down one of the city’s prominent opposition figures.
Secretary for Security John Lee issued notices to freeze all the shares of Next Digital Ltd. held by Lai, and local bank accounts of three companies owned by him, according to a government statement issued late on Friday. Lai, 73, resigned as chairman of the media group in December ahead of a bail hearing.
Since Beijing imposed the law last year, the government in Hong Kong has disqualified lawmakers, delayed a parliamentary election and charged or jailed dozens of pro-democracy politicians. Lai was recently sentenced to a total of 14 months in prison for attending unauthorized protests alongside other activists, and charged with more national security offenses.
It marks the first time that authorities have used the security law to freeze the shares of a listed company’s large shareholder, a step that is likely to spook investor sentiment in the Asian financial hub. More than 40% of members surveyed by the American Chamber of Commerce in Hong Kong said they might leave the city, highlighting the business community’s concerns over the security law and the government’s handling of Covid-19.
“Not content to just jail its critics, Beijing is determined to crush Jimmy Lai, whose only crime is to peacefully promote democracy in Hong Kong,” said Maya Wang, senior China researcher at Human Rights Watch.
Lai is one of the most prominent among Hong Kong democracy campaigners facing multiple charges for challenging Beijing’s tightening grip on Hong Kong following sometimes-violent protests in 2019. While Hong Kong’s government maintains it’s pursuing cases with no political motivations, lawyers and activists say the flood of legal proceedings is designed to deter others from organizing demonstrations and criticizing Beijing.
Financial Secretary Paul Chan said in April the government had a responsibility to tackle “any financing activities that could violate the National Security Law, ensuring our financial system will not be used to carry out activities that could threaten the national security.”
The freeze is unrelated to Next Digital’s bank accounts and will not affect the operation of the group and its media outlet, Apple Daily reported, citing Chief Executive Cheung Kim-hung. Lai held about 71.3% of Next Digital shares as of September, according to the company’s interim report.
Separately, Apple Daily in Taiwan will stop its print edition from tomorrow, May 18, due to continued losses. The newspaper said the deteriorating political situation in Hong Kong has led to a reduction in advertising revenue as “pro-China forces” have refused to advertise in the publication. MDT/Bloomberg