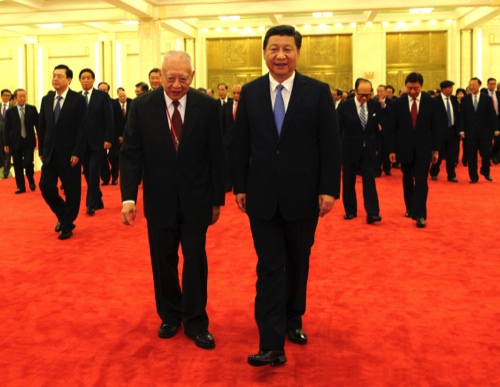 As trouble brews in Hong Kong, who’s Beijing going to call? The billionaires.
With political tension in the southern Chinese financial hub at its highest in years, China’s leaders summoned dozens of the city’s tycoons earlier this week for talks.
The rare trip by the large contingent of business leaders to meet President Xi Jinping in Beijing highlighted the unlikely role that Hong Kong’s capitalists have played as longstanding supporters of China’s communist rulers.
“I see most of my old friends,” Xi said with a light chuckle as he sat down for the meeting with 70 of Hong Kong’s richest and most powerful people.
Seated next to him in the Great Hall of the People was billionaire businessman Li Ka-shing, Asia’s wealthiest person, who Xi greeted with a hearty double-handed handshake. Between them was Tung Chee-hwa, son of a shipping magnate who China anointed as Hong Kong’s first leader after taking back control of the former British colony in 1997. Other Hong Kong billionaires with interests in property, media, banking and finance and casinos filled out the ranks.
Beijing has long courted the tycoons, who employ hundreds of thousands of people, for the influence they have in the capitalist enclave of Hong Kong.
The meeting coincided with the start of a protest involving thousands of Hong Kong college students against Beijing’s refusal to grant democratic reforms that would let Hong Kong’s people have a genuine say in electing their own leader. It also came ahead of a planned rally by pro-democracy activists to “occupy” the Asian financial hub’s central business district as early as next week, which has raised the hackles of business leaders.
The central business district is Hong Kong’s “lifeline” as a global financial center and occupying it would be “tantamount to destroying the Great Wall” — a potent national symbol — billionaire property developer Lee Shau-kee told Hong Kong reporters after meeting with Xi.
“Hong Kong will lose its advantage and its prosperity will wane. It’s unwise,” he said, calling for the organizers to stop.
Henry Tang, the heir to a Shanghai textile fortune and former senior government official, said Xi supports the Hong Kong government’s work and said candidates for Hong Kong leader must be “patriots.”
Beijing used the meeting to reinforce its message that candidates for Hong Kong leader in promised elections must first be screened by a committee in tune with the priorities of China’s leadership. The stance has sent tensions soaring in the former British colony. Surveys show the approval rating of the city’s Beijing-backed leader, Chief Executive Leung Chun-ying, is plummeting while distrust of China’s central government is at the highest level since the handover.
Discontent, especially among the young, is fuelled by a widening wealth gap that many blame on the billionaires, a large number of whom made their fortunes in property development and also sit on a panel that selects Hong Kong’s leader. Once revered for their business acumen, they’re now reviled for cozy ties with the government, which tightly controls the supply of land for development, making home ownership unaffordable for many.
Monday’s meeting was the first time that such a big delegation has travelled to the Chinese capital since 2003. That year, a similar group made the journey after more than half a million took to the streets to protest a deeply unpopular plan to introduce anti-subversion legislation.
For the tycoons, supporting China’s communist leaders ensures their business interests survive, analysts said.
“Beijing thinks that Hong Kong people are economic animals, so they think that if they can get the tycoons lobbying for support” there is a better chance residents will accept its decision to curb democratic reforms, said Willy Lam, a political analyst at Chinese University of Hong Kong.
As a reward for falling in line, “Beijing has given them reassurance that they will not be marginalized by huge Chinese companies,” said Lam.
Most of Hong Kong’s tycoons are private entrepreneurs who founded their own companies, in contrast with China’s big state-owned firms that have a growing presence in Hong Kong.
Investments by Hong Kong tycoons in mainland China is another source of political leverage for Beijing.
“Beijing thinks that these tycoons can be held hostage because of their big exposure in China,” said Lam. “The tycoons dare not go against Beijing simply because they have so much at stake in the China market.”
Hong Kong’s tycoons are also worried about other reforms demanded by democracy activists, chiefly replacing seats in the legislature held by business groups with directly elected ones, said Sonny Lo, a governance expert at the Hong Kong Institute of Education.
Big business is concerned that if its say in the legislature is eroded, the freewheeling capitalist hub could be put on a path to a European social welfare state by requiring companies to provide more benefits to workers, he said.
Last month, a Chinese legal scholar on a committee overseeing Hong Kong’s mini-constitution made a rare acknowledgement that these concerns are also on Beijing’s mind.
“To some business elites, if the democrats can capture the entire Legislative Council, then social welfarism would likely be the result that would undermine the economic prosperity of Hong Kong,” Lo said. Kelvin Chan, Business Writer,
Hong Kong, AP