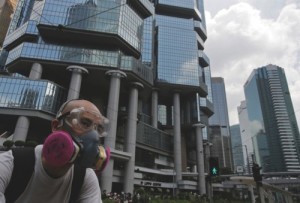 Pro-democracy protesters wearing masks and wielding umbrellas to protect against pepper spray and tear gas expanded their rallies throughout Hong Kong yesterday, defying calls to disperse in a major pushback against Beijing’s decision to limit democratic reforms in the Asian financial hub.
Hong Kong’s police yesterday defended their use of tear gas and other tactics to control protests that have paralyzed the city’s financial district, appealing to the thousands gathered to demand more democracy to stop the unprecedented mass act of civil disobedience for the sake of safety and stability.
Crowds grew yesterday evening as people getting off work joined weary-looking students camped on major roads near the city’s government headquarters and in several other parts of the city. Uniformed police manned barricades and looked on, preventing access to some buildings, but did not otherwise intervene. 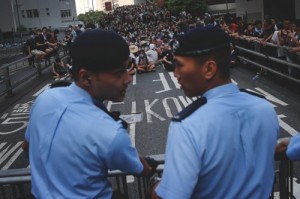 Police said they used 87 rounds of tear gas on Sunday in what they said was a necessary but restrained response to protesters’ efforts to push through cordons and barricades. They said 41 people were injured, including 12 police officers.

“Police cordon lines were heavily charged, by some violent protesters. So police had to use the minimum force in order to separate the distance at that moment between the protesters and also the police,” Cheung Tak-keung, the assistant police commissioner for operations, told reporters yesterday.
Riot police withdrew from the extraordinary scene of chaotic tear gas-fueled clashes that erupted the evening before and the government asked the student-led protesters to disperse peacefully.
But the demonstrators, whose use of umbrellas, plastic wrap and other improvised defenses has led some to dub their movement the “Umbrella Revolution,” remained camped out on a normally busy highway near the Hong Kong government headquarters. Supporters were using the phrase on social media.
Police had tried earlier to negotiate, with an officer asking them through a bullhorn to clear the way for the commuters. A protester, using the group’s own speaker system, responded by saying that they wanted Hong Kong’s Chief Executive Leung Chun-ying to demand a genuine choice for the territory’s voters.
“Do something good for Hong Kong. We want real democracy!” he shouted.
With rumors swirling, the Beijing-backed and deeply unpopular Leung reassured the public that speculation that the Chinese army might intervene was untrue.
“I hope the public will keep calm. Don’t be misled by the rumors. Police will strive to maintain social order, including ensuring smooth traffic and ensuring the public safety,” Leung said. “When they carry out their duties, they will use their maximum discretion.” 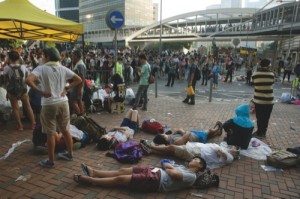 Despite a night of clashes with riot police, student protesters continue to occupy the streets

Across Victoria Harbor, in crowded Kowloon, crowds blocked a major intersection, as young people climbed atop subway station exits and activists rallied the crowds.
While many Hong Kong residents support the calls for greater democracy the unrest worries others.
“I strongly disagree with the protesters,” said an older woman who gave only her surname, Chan. “Those of us who came to the city 60 or 70 years ago had nothing and we worked and suffered so much to make Hong Kong the rich city it is today. And now the protesters have made our society unstable. For me, being able to eat and sleep is already a luxury. I don’t need democracy. What does it mean?”
Many younger Hong Kong residents have much higher expectations. Raised in an era of plenty and with no experience of the political turmoil of past decades in mainland China, they are demanding universal suffrage and protesting Beijing’s decision last month that candidates in the city’s first-ever election for the top leader must be hand-picked by a committee of mostly pro-Beijing tycoons, a move many residents of the former British colony view as reneging on promises to allow greater democracy in the semi-autonomous territory.
China has called the protests illegal and endorsed the Hong Kong government’s efforts to quell the demonstrations, which are undermining the city’s image as a safe financial haven. Beijing has taken a hard line against a variety of threats to the Communist Party’s monopoly on power, including clamping down on dissidents and Muslim Uighur separatists in the country’s far west.
The Hong Kong authorities’ efforts to shut down the protest so far have backfired, said Steve Tsang, a senior fellow at the University of Nottingham’s China Policy Institute.
“People are feeling a kind of guilt that they were allowing the young kids in their late teens and early 20s to take all the risks, so people are coming out to support them. That’s what we are seeing on the ground,” he said.
While Hong Kong was under British rule, its leader was chosen by London in an arrangement that faced virtually no opposition. After China took control from the British in 1997, it agreed to a policy of “one country, two systems” that allowed the city a high degree of control over its own affairs and kept in place liberties unseen on the mainland. It also promised the city’s leader would eventually be chosen through “universal suffrage,” a pledge that Hong Kongers now say Beijing is failing to keep.
The protests began a week ago with a class boycott by university and college students, who said they would stand firm until officials meet their demands for reforming the local legislature and withdrawing the requirement that election candidates be screened.
Leaders of the broader Occupy Central civil disobedience movement joined them early Sunday, saying they wanted to kick-start a long-threatened mass sit-in demanding Hong Kong’s top leader be elected without Beijing’s interference.
Occupy Central issued a statement yesterday urging Leung to resign and saying his “non-response to the people’s demands has driven Hong Kong into a crisis of disorder.” It said the protest is now “a spontaneous movement” of all Hong Kong people. Kelvin Chan, Hong Kong, AP