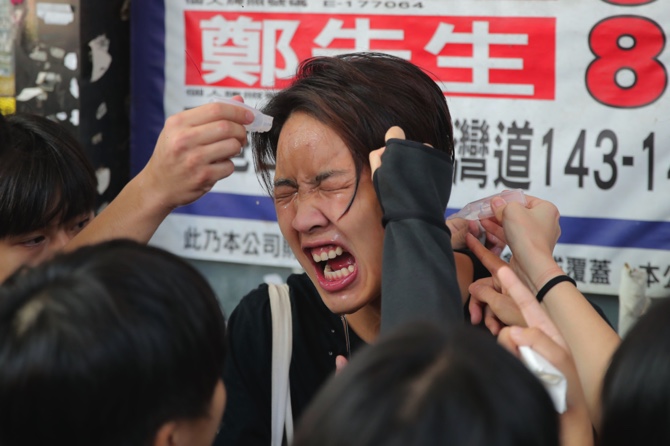 Hong Kong’s leader pledged yesterday to “spare no effort” in bringing an end to anti-government protests that have wracked the city for more than five months, following a day of violence in which one person was shot and another set on fire.

Carrie Lam’s comments are likely to fuel speculation that harsher legal and police measures may be in the works to curb the protests.

“I do not want to go into details, but I just want to make it very clear that we will spare no effort in finding ways and means that could end the violence in Hong Kong as soon as possible,” Lam told reporters.

“If there is still any wishful thinking that, by escalating violence, the Hong Kong SAR government will yield to pressure to satisfy the so-called political demands, I am making this statement clear and loud here: That will not happen,” Lam said, using the initials for Special Administrative Region, which describes the city’s status as a semi-autonomous Chinese territory.

Yesterday’s violence is likely to further inflame passions in Hong Kong after a student who fell during an earlier protest succumbed to his injuries on Friday and police arrested six pro-democracy lawmakers over the weekend on charges of obstructing the local assembly during a raucous May 11 meeting. All were freed on bail.

China’s ruling Communist Party has also indicated it may try to find a way to enact anti-subversion laws in the territory, after such measures were shelved previously due to public opposition.

While Beijing has dismissed reports it may replace Lam next year, the party last week issued a statement saying it would “perfect” the system to appoint and dismiss Hong Kong’s leader and top officials.

In a widely distributed video, a police officer is shown shooing away a group of protesters at an intersection yesterday morning, then drawing his gun on a masked protester in a white hooded sweatshirt who approaches him.

The protester in white manages to flee, bounding up a nearby stairway, and the officer and a colleague pin the two in black to the ground.

Police said that only one protester was hit and that he was undergoing surgery. The Hong Kong hospital authority said the person was initially in critical condition but was stable after surgery.

It was the second time a protester has been shot since the demonstrations began in early June, although police have repeatedly drawn their firearms to ward off attacks. More than 3,300 people have been arrested in the protests.

Police fired tear gas and deployed a water cannon in various parts of the city yesterday and charged onto the campus of The Chinese University of Hong Kong, where students were protesting. Video posted online also showed a policeman on a motorcycle riding through a group of protesters in an apparent attempt to disperse them.

Police spokesman Tse Chun-chung said the shooting, burning and motorcycle incidents were all under investigation, but defended the officers’ actions as necessary to safeguard their own safety. Tse said two people were arrested in the shooting incident, including the person shot, but no one has yet been detained over the burning. 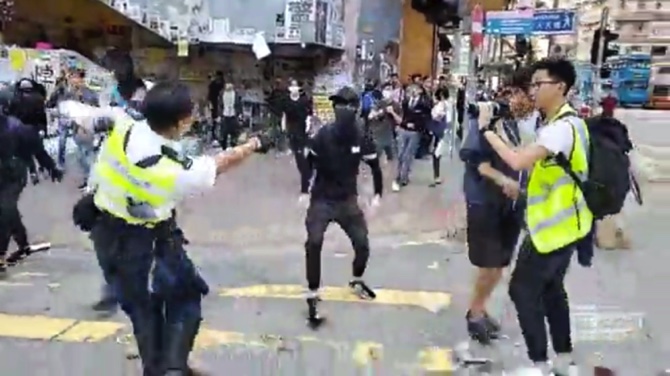 In this image made from video, a police officer (left) prepares to shoot a protester yesterday

Protesters built barricades and blocked roads at about 120 locations across the city of 7.4 million and demonstrations were still ongoing, Tse said.

“Continuing this rampage is a lose-lose situation for Hong Kong. Everyone is a loser,” Tse said.

Rail service was partly suspended because of fires and obstacles on the tracks and windows were smashed at a branch of the state-owned Bank of China. Large parts of the downtown business district were closed to traffic as protesters surrounded by onlookers engaged in a standoff with police.

The protests began over a proposed extradition law and have expanded to include demands for greater democracy and police accountability. Activists say Hong Kong’s autonomy and Western-style civil liberties, promised when the former British colony was returned to China in 1997, are eroding.

The video of yesterday’s shooting was posted on Facebook by Cupid Producer, an outlet that started last year and appears to post mostly live videos related to local news.

The shooting occurred on a crosswalk at a large intersection strewn with debris that had backed up traffic in Sai Wan Ho, a neighborhood on the eastern part of Hong Kong Island.

In a statement, the Hong Kong government said police had been responding to vandalism and disruptions to traffic, including protesters throwing heavy objects onto roads from above.

“During police operations, one police officer has discharged his service revolver, one male was shot,” the statement said, adding that officers also drew their guns in the Shatin and Tung Chung neighborhoods.

The statement denied what it called online rumors that police had been ordered to “recklessly use their firearms,” calling the allegation “totally false and malicious”

“All police officers are required to justify their enforcement actions,” the statement said.

A patch of what looked like dried blood could be seen in a cordoned-off area after the shooting, as onlookers shouted insults at the police.

Masked protesters continued to try to block other intersections in the area. Police chased them away with pepper spray, hitting some bystanders as well.

In a separate incident, a man who confronted a group of pro-democracy protesters was doused in a flammable liquid and set alight, according to a graphic video seen to MDT and widely shared on social media. The video shows an unidentified and unarmed man shouting expletives at protesters before saying “you’re all not Chinese.”

The man is in the hospital in a critical condition, the city’s Hospital Authority told CNN. A Hong Kong police source said that they are investigating the incident which took place yesterday at the Ma On Shan subway station in the New Territories.

The city has been rocked by the death Friday of the university student who fell from a parking garage when police fired tear gas at protesters.

The territory is preparing for Nov. 24 district council elections that are viewed as a measure of public sentiment toward the government.

Pro-democracy lawmakers accuse the government of trying to provoke violence to justify cancelling or postponing the elections. MDT/AP