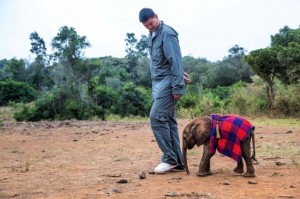 In the Sheung Wan district of Hong Kong, just across the street from a popular department store, Ming Hing Arts has a newly opened shop selling chopsticks, bracelets, Buddha statues, and other carvings made from ivory. Ming Hing offers something for every pocketbook: A carving of the Monkey King from the classic novel Journey to the West will set you back HK$2.88 million (USD371,000), but you can buy a toothpick for HK$38.
Some of the ivory comes from elephants. You say you’re worried about the dwindling population of the African herds? Not a problem: Ming Hing also offers items carved from the ivory of extinct woolly mammoths recovered from the Arctic tundra. In the shop window is a 3-foot-long mammoth tusk, yours for just HK$1.88 million.
As climate change melts the permafrost in the north, more mammoth tusks are available for Hong Kong’s ivory dealers. China imported an average of less than 9 tons of mammoth ivory a year from Hong Kong in the early 2000s, but from 2007 to 2013 average annual imports increased to 31 tons. The value of mammoth ivory imports to Hong Kong averaged HK$1 million per ton in 2010. By last year it had gone to HK$2.2 million.
HK$2.2m
The growing popularity of mammoth tusks once offered the promise of guilt-free consumption of ivory. A global ban on the international trade of elephant ivory took effect 25 years ago, although merchants could continue selling from their existing stockpiles. To an untrained eye, there’s little difference between trinkets carved from elephant ivory and mammoth ivory. But activists worry that some merchants selling mammoth ivory are also disguising illegal sales of ivory taken from elephants killed in Africa by poachers. Some retailers “say they’re selling mammoth ivory, but they’re not; they’re really selling elephant ivory,” says Frank Pope, chief operations officer of Save the Elephants, a British charity with operations in Kenya. Ming Hing Arts declined to comment. The boutique is fully licensed to deal in elephant ivory.
Hong Kong, long a center of the global ivory trade, had 111.3 tons of elephant ivory licensed for commercial use in 2014, the latest figure available from the government’s Agriculture, Fisheries and Conservation Department. That’s down from 121.1 tons in 2010. Elizabeth Quat, a member of the Hong Kong legislature, says the city remains an “illegal trading hub” for elephant ivory sold by poachers. She wants a temporary ban on all sales of African ivory to give the government time to come up with a more effective way to police the trade. On Feb. 10, Quat held a press conference to call for a ban in China, too.
The growing presence of mammoth ivory makes the market even murkier, says Alex Hofford, campaign manager in Hong Kong for the anti-poaching group WildAid, which has recruited retired NBA star Yao Ming as one of its celebrity ambassadors on the mainland. Anyone purchasing elephant ivory in Hong Kong isn’t allowed to take it across the border to China, but Hofford says mainland tourists will often buy ivory chopsticks as souvenirs. “The chopsticks are never made out of mammoth ivory,” Hofford says. “They’re always from elephants.” He says some dealers will issue certificates falsely identifying the source of the ivory as mammoths. That’s a plausible ploy because there are a lot of mammoth ivory objects for sale in Hong Kong shops.
About 90 percent of local retailers selling ivory don’t have licenses to sell ivory on display, as required by the government, Quat says, so it’s hard to know if their inventory is legitimate ivory from the pre-1990 supply or smuggled ivory from freshly killed elephants. “We really don’t know if what they are selling is legal,” says Quat.
He also says the government needs to work harder to get the message out to tourists that there’s a downside to buying ivory bric-a-brac for the relatives back home. “We have to educate people not to buy ivory at all,” she says. “If there’s no demand, there would be no killing.” Bruce Einhorn, Bloomberg