Hong Kongers call US violence a setback for democracy 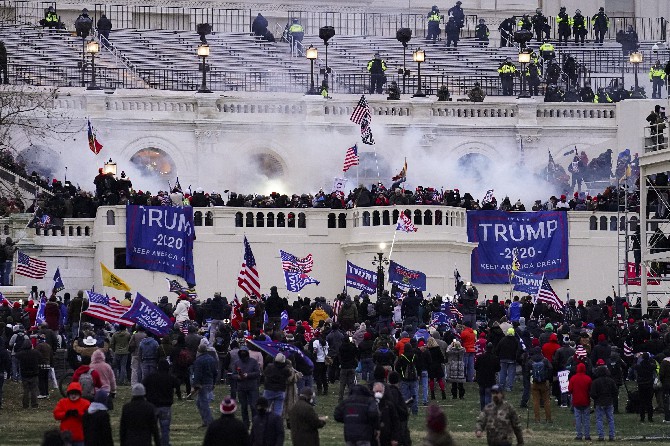 Hong Kong residents from across the political spectrum condemned mob violence at the U.S. Capitol, 18 months after protesters stormed their own legislature to demand greater democracy, not the overthrow of election results.
Pro-democracy activists said America’s reputation and democracy were damaged by yesterday’s violence, in which supporters of President Donald Trump smashed their way into the U.S. Capitol in an attempt to overturn America’s presidential election and keep Democrat Joe Biden from replacing Trump.
Those in Hong Kong’s pro-Beijing establishment also denounced the violence, calling it a possible insurrection.
The storming of the U.S. Capitol came one day after Hong Kong authorities arrested 53 pro-democracy activists, accusing them of subversion over allegations they sought to elect lawmakers who would hamstring the Legislative Council’s work and force the resignation of Chief Executive Carrie Lam.
The violence in Washington weakened arguments for American democratic values, said Lee Cheuk-yan, a pro-democracy activist and one of the organizers of an annual vigil commemorating the bloody crackdown on student-led pro-democracy protests in Beijing’s Tiananmen Square in 1989.
“It’s very sad for us in Hong Kong to see mobs attacking Capitol Hill and trying to overthrow the election results. We in Hong Kong are fighting for a democracy in which everyone has a right to vote,” Lee said. “But when we look at the U.S., it’s now a subversion of the will of the people by violence.”
Lee said the U.S. has now become a “laughingstock.”
“The most damaging part is that the democratic world has been weakened, and when that happens it strengthens the hand of authoritarian rulers from all over the world,” he said.
Hong Kong experienced months of anti-government protests in 2019 against proposed legislation that would have allowed suspects in the semi-autonomous city to be sent to mainland China for trial. The bill was withdrawn but the protesters’ demands morphed into calls for greater democracy and other reforms that were rejected by the government amid increasing violence between demonstrators and police.
The July 1-2, 2019, attack on the Legislative Council, in which protesters occupied and defaced the chamber and offices, was seen as a turning point that hardened opinions on both sides.
“At least in the U.S., their elections are fair. In Hong Kong, elections are canceled,” said Leslie Chan, a district councilor in Hong Kong, referring to a year-long postponement of the city’s legislative elections by Lam, who cited public health risks from the coronavirus.
Beijing’s backers in the territory criticized the U.S. violence as a sign of a breakdown in law and order and respect for the government.
Pro-Beijing lawmaker Regina Ip called the use of violence in an attempt to overturn an electoral outcome “very serious” and said such acts could be seen as an insurrection.
Ip, a former Hong Kong secretary for security, said some U.S. politicians had dismissed the storming of Hong Kong’s legislature as something “not to be taken seriously.”
“Our police were accused of brutality, but their police have used much more force. They’ve already killed one person,” she said. One protester was shot inside the Capitol during yesterday’s violence, while three other people died from medical emergencies.
“So I think this is a clear example of how we all live in glass houses, don’t throw stones. They lived in a glass house and they kept throwing stones at ours,” she said. ZEN SOO, HONG KONG, AP