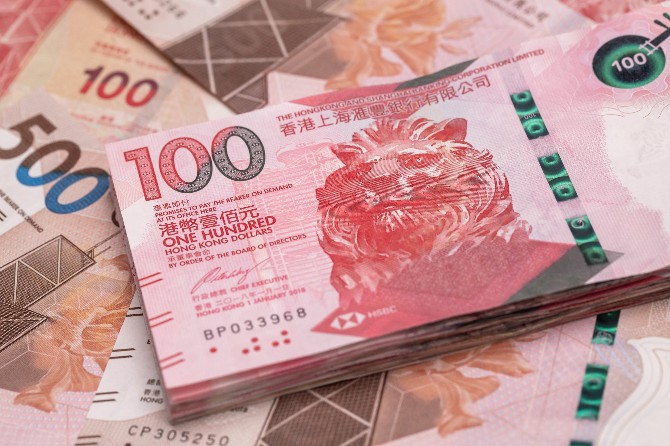 The Hong Kong dollar is suddenly appearing more vulnerable, after weeks of trading at the strong end of its band against the greenback.
Late on Friday, the currency weakened in its biggest drop since mid-June, when the exchange rate was buffeted by Beijing’s decision to impose laws curbing dissent in the city. The decline, which has since almost been erased, was unexpected, given persistent inflows into the former British colony.
The Hong Kong dollar is pegged to the U.S. dollar in a band that ranges between 7.75 and 7.85 to the U.S. dollar. In turn, Macau’s pataca is fixed to the Hong Kong dollar at an exchange rate of 1.03. As the Hong Kong dollar is pegged to the greenback, both special administrative regions essentially import U.S. monetary policy, though local banks aren’t obliged to follow with lower retail costs.
Traders are watching the Hong Kong dollar closely for any signs of outflows from the former British colony amid worsening U.S.-China tensions and doubts over the city’s future as a financial hub. Over the weekend almost 600,000 residents defied the new security law to vote in primaries held by pro-democracy opposition parties, even after a government minister suggested that participating could run afoul of the law.
“The depreciation might be an early sign of concerns over the U.S.’s financial sanctions as supportive factors such as large listings and dividend payments may start to cool down later in July,” said Ken Cheung, chief Asian currency strategist at Mizuho Bank Ltd. “The narrower rate spread with the greenback is also hurting the Hong Kong dollar, which may stay away from the strong end and weaken to 7.7550 in the near term.”
There is so far little evidence that traders are betting on sustained weakness. The Hong Kong dollar’s three-month risk reversal, a gauge of bearishness in the options market, is close to the lowest level since August despite a small uptick on Friday. The currency’s forward points of the same tenor are near a four-month low, reflecting limited concerns on depreciation or liquidity tightness.
The gap between the Hong Kong dollar’s one-month Hibor and the borrowing costs on the greenback was last at 22 basis points, close to the 20 basis point level which OCBC Wing Hang Bank Ltd. has said would make the long carry trade unattractive.
The Hong Kong Monetary Authority sold HKD48.7 billion ($6.3 billion) last week alone to keep the currency from strengthening beyond its trading band. That was despite news some Trump aides are considering ways to undermine the peg mechanism, according to people familiar with the matter.
Friday’s loss also came after the Hang Seng Index fell 1.8%, paring its gain for the week to 1.4%. MDT/Agencies