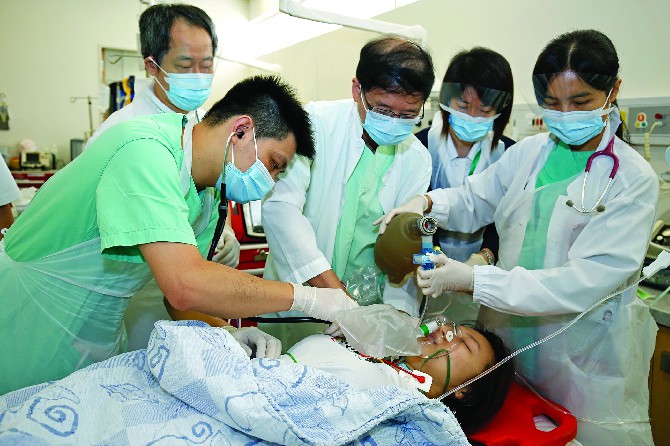 A group of nurses from Kiang Wu Hospital have published an open letter accusing the private hospital of engaging in malpractice which undermines the government’s strategy to control the local outbreak of novel coronavirus, also known as 2019-nCoV.
In the letter, which was published online and signed as a “group of frontline workers,” the nurses listed a series of malpractice incidents which had occurred at the hospital.
One of the allegations was that not all the masks distributed to staff were surgical masks, which are necessary to effectively prevent the wearer from being infected with the virus. The nurses also said that the hospital had refused to provide protective equipment to personnel in the respiratory department.
The patient who was diagnosed as the eighth case of novel coronavirus in Macau is a 64-year-old woman from Macau. She was transferred to Kiang Wu Hospital when her fever and cough did not improve despite being admitted to Conde S. Januário Hospital.
According to Chief Executive Ho Iat Seng, the local woman caused a potentially serious incident which resulted in the isolation of around 20 medical staff at Kiang Wu Hospital, after it was discovered that she had concealed information regarding her travel to the mainland.
According to the open letter, the hospital also does not provide accommodation for nurses who are in close contact with patients showing symptoms of the virus, stating that the hospital “has not yet provided a suitable and isolated place to house the most exposed nurses.”
In the conclusion of their letter, the nurses mentioned that one of the patients who was diagnosed with fever “was not put in an isolation room for 14 days,” a measure to prevent the spread of possible infection.
However, Kiang Wu Hospital dismissed the accusations, stating that frontline nurses may be suffering from psychological and emotional pressures, hence the issuing of an open letter.
As cited in local media reports, the hospital said it “strongly urged that you do not create rumors, do not spread rumors, and do not believe rumors.”
Meanwhile, the medical director of Conde S. Januário Hospital, Dr. Lei Wai Seng, urged the employees to submit their concerns to hospital management.
“We do not want or have the right to prohibit the demonstration of workers, but these situations can be used by other people with the intention of causing a negative environment among those who are at the forefront of fighting the epidemic,” said Lei.
The official clarified that health authorities are in contact with the city’s hospitals and clinics to ensure that they have enough equipment and accessories to protect against the virus. Lei says the stockpiles should last for up to six months.