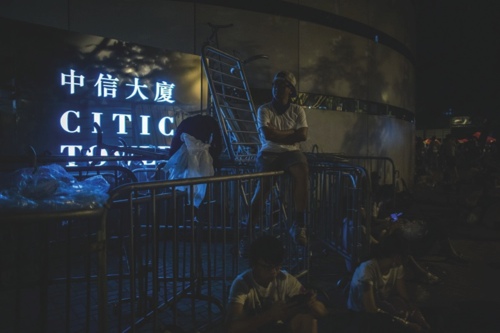 Standard Chartered and HSBC were among banks that shuttered some branches in Hong Kong as pro-democracy protesters remained on the streets following weekend clashes with police.
About 44 branches, offices and automated teller machines were closed yesterday, according to the Hong Kong Monetary Authority. The front entrance of the Cheung Kong Center, home to Goldman Sachs Group Inc. and Barclays Plc in the city, was barricaded, with demonstrators gathered peacefully on a blocked road about 200 meters away in the late afternoon.
Hong Kong stocks dropped after protest-rallies mushroomed Sunday, leading to violent clashes, and people dressed in black blocked some roads into the business district yesterday. The closures marked the biggest disruption to banks’ operations in the city since at least the 1970s, though a lull through most of the day allowed people to go to work in the financial hub.
“I have not seen anything like this before,” Ma Yue, a finance professor at City University of Hong Kong, said by phone. “While Hong Kong had experienced social disturbances in the ’60s, those are not comparable with today’s situation because Hong Kong was not an international financial centre.”
An office for Barclays in the Cheung Kong Center building was closed, while three Citigroup outlets in the city were also shut, according to a list released by the HKMA. Some Citic Securities International Co. and Ernst & Young staff were working from home, the firms said.
Local and foreign banks together have about 1,372 branches in Hong Kong. The financial-services industry employs more than 220,000 people, or approximately 6 percent of the city’s workforce. HSBC had 29,000 employees in Hong Kong as of the end of last year, while Standard Chartered has about 6,000 people.
An HSBC branch in Mong Kok district, which is one of the city’s most densely populated areas, was among those closed after protests unexpectedly spread beyond the main island. The bank also shut outlets in the shopping district of Causeway Bay, where demonstrators had congregated, and Admiralty, home to the government’s main offices and site of the most violent confrontations during the weekend.
Services elsewhere were operating normally, including at its main office in the Central district, the London-based bank said in an e-mailed statement. Europe’s biggest bank has about 162 sites in Hong Kong, according to its website.
“Investors are feeling uneasy as the Occupy protests are still going on,” Castor Pang, head of research at Core Pacific-Yamaichi in Hong Kong, said by telephone. “Developments in the next one to two days will be crucial because that will let us know whether the protesters will voluntarily disperse.” Alfred Liu and Cathy Chan, Bloomberg