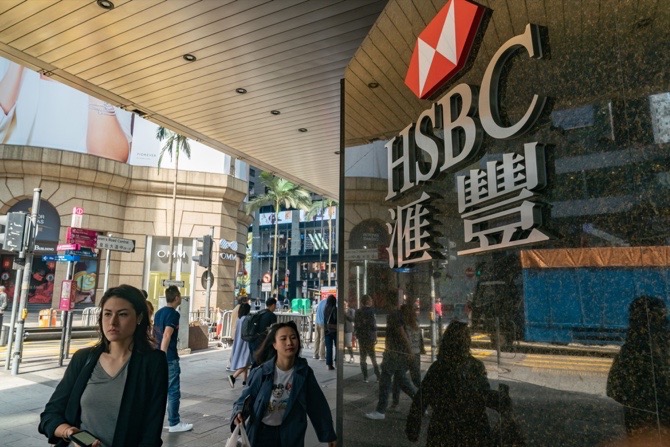 The warning contained in the bank’s 2018 annual report from Pricewaterhouse Coopers LLP focused on Chief Executive Officer John Flint’s aim of driving revenue at a faster pace than costs. It has been at the heart of his strategy to improve returns at the lender, whose global network stretches from New York to London to Shenzhen. HSBC’s latest annual report was published in February this year.

Flint’s goal increased the “incentive for management to override controls to meet targets,” according to the auditor’s summary, which was on page 211 of HSBC’s 322-page filing. In the comments, which haven’t been reported before, the accounting firm wrote the measure was vulnerable to misstatement because it was “highly sensitive to small changes.” HSBC and PwC in London declined to comment beyond the disclosures.

PwC, the bank’s auditor since 2015, performed “a number of incremental procedures which might indicate that revenue or costs were intentionally misstated,” it said in the HSBC report. There was no evidence of wrongdoing, according to a person familiar with the matter, who asked not to be identified discussing a confidential topic.

The mounting concerns from the auditors came amid HSBC’s most aggressive cost-cutting. At a global leadership summit held in Hong Kong in March, Flint rebuked top managers for missing revenue and cost targets, calling out executives for their “incompetence” and their inability to keep a rein on costs. As HSBC missed that goal in 2018, he reiterated the promise for 2019.

“The language seems fairly strong to me,” said Joseph Dickerson, banks analyst at Jefferies International in London referring to the PwC comments. “Clearly, the group audit committee has identified this as a key risk and presumably wants to be ahead of the curve. It bears watching.”

An analysis of PwC’s finding was presented to members of HSBC’s group audit committee in February 2019. The auditor said it performed various tests to assess the impact of the “enhanced incentives,” looking at whether revenues and expenses were booked in the correct period and how bonuses had been accounted for.

Around the same time as PwC presented its findings to board members, HSBC launched a new initiative known as “Project Oak” designed in part to encourage managers to take action on costs.

Project Oak has already led to some job cuts. Bloomberg News has reported that HSBC was preparing to make several hundred redundancies in the division which houses its trading and advisory businesses.

The alert from PwC wasn’t the first since the accounting firm took over as HSBC auditor four years ago. In the bank’s 2017 annual report, PWC said that an earlier set of targets set by Flint’s predecessor, Stuart Gulliver, could be at risk of tampering. However, the accounting firm wrote this did not “reflect specific concern about HSBC or its management” — a caveat that didn’t appear in the February commentary.

Under Gulliver’s leadership, HSBC had also worked to a target of generating a faster rise in revenue than costs, a metric known as positive jaws. The bank had met the goal in both 2016 and 2017.

Audit firms in the U.K. have faced increased scrutiny of their independence in recent years as questions have grown about their impartiality, particularly when reviewing the accounts of clients who pay them for services in addition to their role as auditor.

“It strikes me as quite a positive move that they are openly prepared to say this,” said Mark Garnier, a British lawmaker and a member of the House of Commons’ All-Party Parliamentary Group on corporate governance. “If it means the auditor is being tougher, then that is ultimately a good thing.” Harry Wilson & Stefania Spezzati, Bloomberg