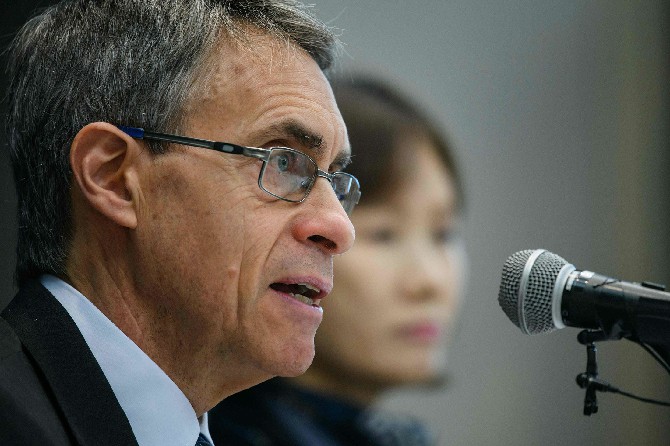 The executive director of campaign group Human Rights Watch said that he was prevented from entering Hong Kong, where he intended to release a report critical of the Chinese government.
Kenneth Roth said in a video posted on Twitter that he had planned to hold a news conference Wednesday to release the rights group’s annual world report.
“I had hoped to spotlight Beijing’s deepening assault on international efforts to uphold human rights,” Roth said in a statement. “The refusal to let me enter Hong Kong vividly illustrates the problem.”
Roth added that Hong Kong officials told him repeatedly that they were barring him for immigration reasons. The Hong Kong Immigration Department said Monday that it doesn’t comment on individual cases, but considers “all relevant factors and circumstances of the case before deciding whether the entry should be allowed or not.”
Last month, the Chinese Ministry of Foreign Affairs said the country would impose unspecified “sanctions” against Human Rights Watch and several other U.S.-based pro-democracy organizations. Geng Shuang, a spokesman for the foreign ministry, said on Monday that “allowing or not allowing the entry of certain people is China’s sovereign right.”
“A lot of facts and evidence has proven that this NGO has supported the anti-China radicals in Hong Kong through various means,” Geng told reporters. “They have a major responsibility for the chaos in Hong Kong. This NGO should be punished and should pay the price.”
The city’s government has occasionally denied entry to public figures in recent years, mostly to human rights campaigners, journalists or politicians who have criticized China.
Last year, Hong Kong denied entry to Dan Garrett, an author who had earlier testified on Hong Kong before the U.S. Congressional-Executive Commission on China, as well as former Philippine Foreign minister Albert del Rosario, who has been critical of Beijing’s claims in the South China Sea.
In 2018, Hong Kong also turned back Financial Times journalist Victor Mallet, who had been denied a visa renewal over an event he hosted at the city’s Foreign Correspondents’ Club, and a year earlier denied entry to British human rights campaigner Benedict Rogers.
Groups like Human Rights Watch have increased scrutiny of Hong Kong during seven months of pro-democracy protests that have led to regular violent clashes between demonstrators and police. The protests continued Sunday, as thousands of people gathered in a square in Hong Kong’s city center for a peaceful afternoon rally under the gaze of riot police who kept their distance from the event while patrolling the area.
China has bristled at accusations that authorities have used excessive force in containing the protests and has rejected international criticism, accusing foreign governments like the U.S. of meddling in its domestic affairs. William Shaw & Iain Marlow, Bloomberg