‘Hunger Banquet’ encourages people to continue helping those in need 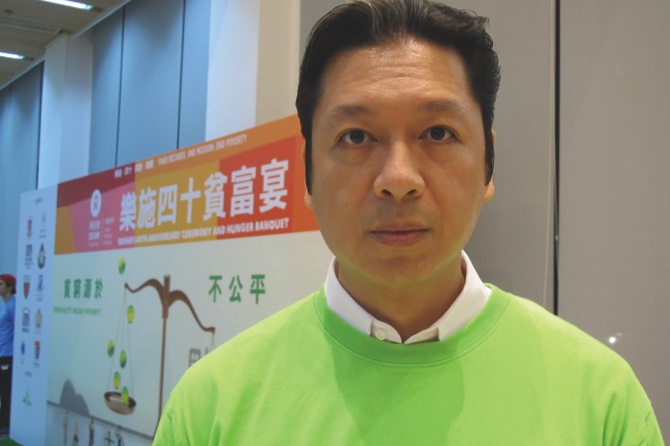 Oxfam’s 40th Anniversary Ceremony and Hunger Banquet was held last week at University of Macau’s (UM) Stanley Ho College. More than 100 people participated in the event, primarily UM students and representatives from Oxfam’s enterprise partners.
During the event, 20 percent of the participants were asked to play the role of the wealthy, while the remaining represented the poor. The disparate situation was implemented to reflect the reality of the world’s current socio-economic conditions, wherein 80 percent of the global population is in fact living in poverty.
This is the first time Macau Oxfam has cooperated with the local university to organize the hunger banquet.
Ivan Sam, board director and vice-chair of Macau Oxfam, told the Times that UM was chosen as the preferred location for the event  because the school has consistently supported Macau Oxfam’s vision to help make the world a better place.
Sam noted that the banquet provides an opportunity for its participants to share their views and ideas on issues related to poverty with their schools, or even with their companies. “It will be the best [outcome] if they can continue [offering help to those who are in need],” he said.
In addition to last week’s event, Sam said that Macau Oxfam will continue to hold its charity events. “In recent years, Macau’s economy slowed down. […] We still face serious challenges when trying to help the poor, and for that we still need to work very hard.”
Sam told the Times that 50 percent of the funds raised by Macau Oxfam’s go to mainland China, followed by Africa, and countries in Southeast Asia.
According to Sam, Macau Oxfam does not simply offer food and resources to those in need, but provides them with seeds, and teaches them how to get out of the poverty cycle.
“Hopefully, they will know how to live on their own, and come out from poverty gradually,” said Sam. “Our faith lies in helping people to learn to help themselves.” Julie Zhu