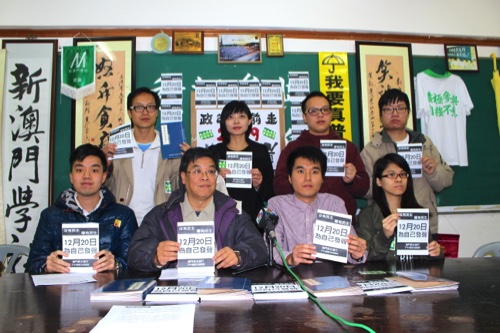 The New Macau Association (ANM) revealed that the Civic and Municipal Affairs Bureau (IACM) imposed restrictions on their proposed protest route planned for this Saturday, TDM News reported.
The pro-democracy group said it received a letter from IACM stating that they would not be allowed to use Penha Garden as the final destination of their demonstration scheduled for tomorrow. ANM’s leaders argue that such a restriction “is illegal” since IACM only possesses the right to impose restrictions or to not approve the organization of a protest five working days after it receives the protest notification. New Macau said it issued the notification on November 28.
Saturday marks MSAR’s 15th anniversary and President Xi Jinping arrives in town today to participate in celebrations.
ANM leaders believe that IACM’s restriction on the protest route might be related to the Chinese president’s visit. “We speculate that it is related to Xi Jinping’s visit. We received this communication yesterday. Why not sooner? An obvious speculation is that the IACM want to circumvent legal challenges which may be brought by us,” said political activist Jason Chao.
If an appeal to court was made, ANM leaders say the court would probably not accept the case due to the shortage of available time before the protest.
New Macau said it will discuss the matter with the police and see whether they can use the Nam Van recreation center as the protest’s final destination. As the site is currently enclosed by fences, the pro-democracy group believes authorities will deny their request.
ANM’s president Sulu Sou said that they will take other actions on that day if their protest is banned. “We won’t give up on taking action even if we can’t go ahead with the protest,” Sou reiterated. CP