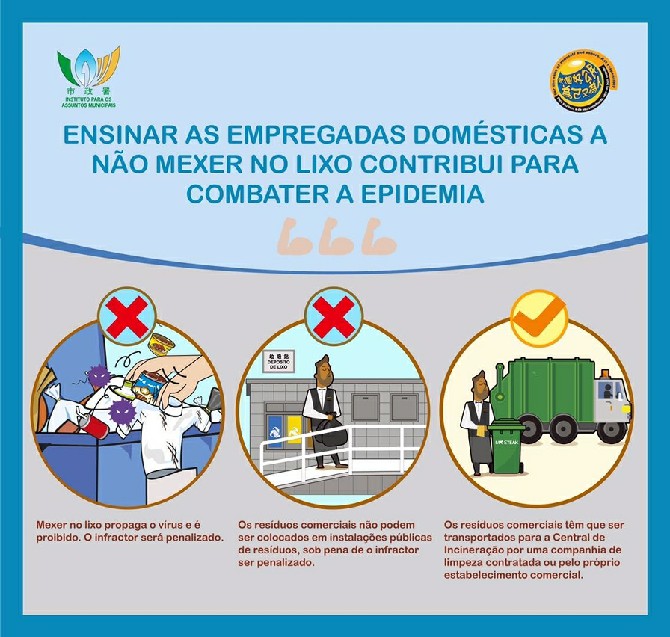 Municipal Affairs Bureau president José Tavares removed an inflammatory message that incited discrimination against domestic helpers from the government website after the bureau was accused of racism against Filipinos.
The infographic was heavily criticized by the Green Philippines Migrant Workers Union in Macau. President of the association, Nedie Taberdo, accused the message of being racist against domestic helpers, who are mostly from Vietnam, Indonesia and the Philippines.
“It is not just domestic helpers who handle garbage. Many Chinese people pick up things from the trash and sell them near Cinema Alegria. They sell used clothes, shoes and many other things. We Filipinos call the place Lapsapan, which means garbage place,” said Nedie Taberdo.
On Monday, the Municipal Affairs Bureau (IAM) issued an infographic urging the city’s domestic helper employers to provide lessons on hygiene to their helpers.
The infographic contained three pictures and the title, “Teach domestic helpers not to go through trash.”
The message was targeted at Macau local residents, skillful professional blue card holders, and those in possession of a special staying visas in Macau, as these parties are allowed to hire domestic helpers.
The infographic urges employers to teach their helpers not to go through trash, not to dump trash produced by business operations into ordinary trash collection systems, and instead to put trash produced by business operations into facilities provided by cleaning companies or to transport them to the incineration plant.
All of these warnings were intended to compel employers to give directives to their helpers on cleanliness in order to combat the epidemic.
In the IAM release, the bureau did not mention any fact or statistic that indicates that domestic helpers engage in the practices listed in the infographic.
As of July 2019, Macau has a total of 25,400 domestic helpers, most of whom are from the Philippines, Indonesia, and Vietnam. Most of these domestic helpers understand either Cantonese, Mandarin, English or Portuguese.
Despite the variety of languages spoken and understood by domestic helpers, and the fact that IAM wants domestic helpers to “learn”, the bureau made the infographic available only in traditional Chinese and Portuguese, deeming employers who understand either language to be the target audience of the infographic.