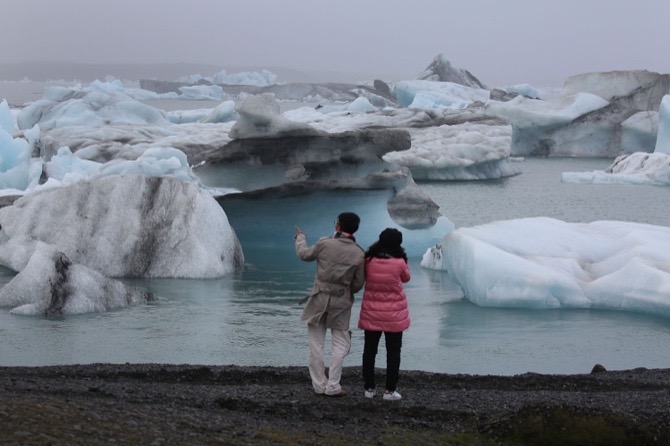 Gudrun Asta Gunnarsdottir found herself at ground zero of Iceland’s latest crisis. Four months into her second pregnancy, the 33-year-old check-in desk operator was told she was one of 315 workers being laid off at Reykjavik’s international airport.

The news came as “a shock” and “caused a lot of sadness for everyone, especially because a lot of people are now looking for work at the same time,” said Gunnarsdottir, who was able to return part-time to her airport job.

The collapse in March of Wow Air is sending ripples through the tiny north Atlantic island, whose spectacular recovery from financial collapse a decade ago was built to a large extent on attracting foreign visitors, thanks in part to its location for the filming of popular television series like Game of Thrones.

The sudden cut in supply caused by Wow Air’s bankruptcy, coupled with high prices and a general drop in demand as a result of a global slowdown, mean the latest numbers look dire. Visitors plunged 24% in May from the same period last year and the all-important summer season is looking shaky. The central bank last month pulled the emergency lever to cushion the blow and delivered a half a point rate cut, while the government has pledged to boost stimulus if needed.

“We are prepared for the possibility of a deeper recession, and the numbers we are getting on tourist arrivals seem to indicate that that may happen,” central bank Governor Mar Gudmundsson said in an interview in Dubrovnik.

After 20 quarters of uninterrupted growth – the longest upswing in its recent history – Iceland is bracing itself for a sharp downturn. Forecasts for 2019 vary widely, with Arion Bank predicting a slump as deep as 1.9%, but there’s a general consensus that the nation is facing its worst contraction since the financial crisis.

Unemployment, while still low in an international context, has risen to 3.6%. It was below 3% at the start of the year.

For all of 2019, the number of visitors could drop 17%, according to forecasts from the Keflavik Airport’s operator. Hotel owners are already feeling the pinch, with overnight stays falling an annual 5% in April and the total number of employees in tourism-related sectors decreasing by a similar percentage in May.

“May’s drop in tourist numbers is larger than what we were expecting,” said Skapti Orn Olafsson, a spokesman for the Icelandic Travel Industry Association.

Despite those concerns, the country is now better positioned to weather the storm.

Almost a decade of solid growth has replenished the state’s coffers; the central bank has ample margins to cut rates (the benchmark rate now stands at 4%); and the capital controls that were introduced in the wake of the financial crisis have now all but been removed.

“We have never been as well prepared in our history to deal with adverse situations as we are now,” Gudmundsson said. “We have policy space, with a lot of scope to cut rates if necessary.” Sedlabanki is due to announce its latest rate decision next week.

Investors are also so far bullish that Iceland will come out okay. The country last week sold 500 million euros (USD565 million) in five-year bonds, in a deal that was almost five times oversubscribed.

The government hasn’t yet announced any specific plans for the tourism sector, but parliament is currently discussing how to spend a 1% budget surplus dividend originally penciled in for 2019.

“Even though we are going through a slump, we will regain our former strength,” said Olafsson at the travel industry lobby. “In 18 to 24 months we will hopefully be back on track.” Ragnhildur Sigurdardottir, MDT/Bloomberg