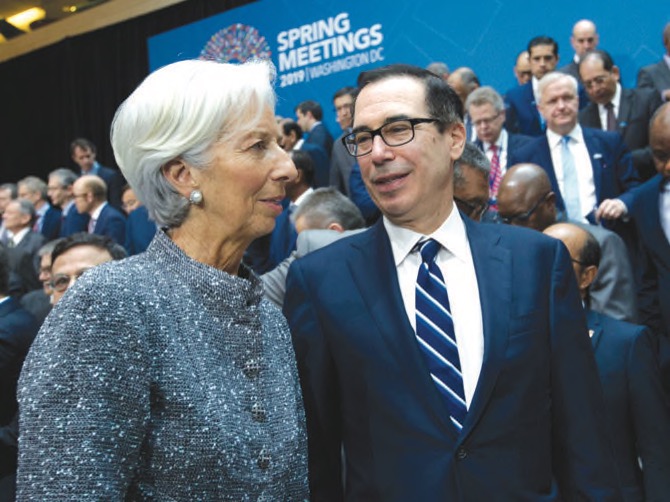 Global finance officials are pledging closer cooperation in efforts to lift the world economy out of its current slowdown, but tensions persist between the United States and other nations over trade and other issues.

Officials wrapped up the spring meetings of the 189-nation International Monetary Fund and the World Bank on Saturday, expressing hope the slowdown that began last year will be followed by stronger growth in the second half of this year and into 2020.

The IMF’s steering committee said all members, in order to protect the current economic expansion, would “act promptly to shore up growth for the benefit of all.”

At a closing news conference, the committee chairman, Lesetja Kganyago, head of the central bank of South Africa, said every country needs to be ready to address issues involving financial stability “with all available tools.”

Many nations were jolted last year when stock markets went into a nosedive, reversed only when major central banks, including the Federal Reserve, halted efforts to tighten credit policies.

Separately, Treasury Secretary Steven Mnuchin told reporters that both the United States and China were moving closer to an agreement on trade. The trade war between the world’s two biggest economies and the punitive tariffs each nation has imposed on the other raised widespread concerns during the talks.

But Chen Yulu, deputy governor of People’s Bank of China, struck a less positive stance in his remarks to the IMF policy committee, contending that rising trade protectionism in the form of punitive tariffs had already begun to disrupt global supply changes.

“The protectionism of some countries has harmed mutual trust among countries, limited the scope for multilateral cooperation and impeded the willingness to achieve it,” he said.

The U.S. and China have imposed tariffs on USD350 billion worth of each other’s goods. They are battling over U.S. allegations that China deploys predatory tactics — including cybertheft and forcing foreign firms to hand over trade secrets — in a sharp-elbowed effort to challenge American technological dominance.

“If we are able to conclude this, it will be the most significant change in 20 years” in the economic relations between the two nations, Mnuchin said.

He said that the proposed agreement the two sides are working on has seven chapters and includes language that will allow both countries to set up enforcement offices to make sure the deal is followed.

In remarks to the World Bank’s steering committee on Saturday, Mnuchin said the U.S. was encouraged that the bank’s private sector lending operation wanted to step up support for nations “affected by fragility, conflict and violence.” But he said World Bank officials must ensure such support is aimed at boosting effective private investments in poor countries.

David Malpass, a longtime World Bank critic, took over as president of the bank on Tuesday with the backing of the administration. Reviewing the meetings this week, Malpass said that the challenges facing the World Bank were more urgent than ever with over 700 million people around the globe still living in extreme poverty.

“It is critically important that we work tirelessly to foster broad-based growth, raise median incomes, create jobs and fully incorporate women and young people in economies,” Malpass said in a statement.

President Donald Trump said in a newly published interview that he had considered his daughter Ivanka, a White House adviser, for the job of World Bank president.

“She would have been great at that because she’s very good with numbers. She’s got a great calmness. […] I’ve seen her under tremendous stress and pressure,” he was quoted as telling The Atlantic.

When Jim Yong Kim resigned suddenly as bank president earlier this year, reports said that Ivanka Trump along with Malpass were being considered for the job, which has always gone to an American. Martin Crutsinger & Paul Wiseman, Washington, AP