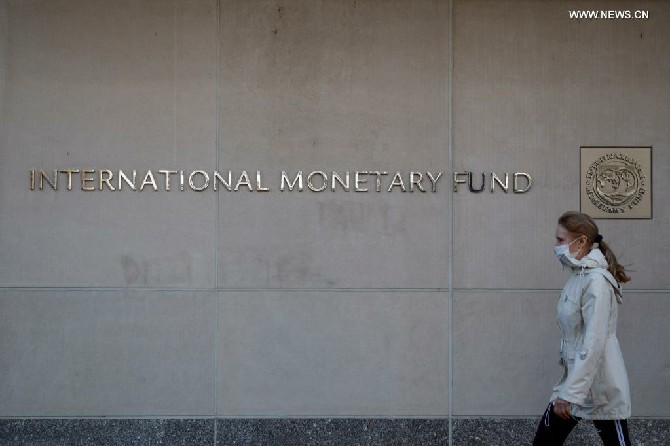 The International Monetary Fund (IMF) on Tuesday maintained its global economic growth forecast at 6 percent for 2021, calling attention to widening gaps in global recovery and warning of downside risks amid vaccine inequality.
In its latest World Economic Outlook (WEO), the IMF said the global growth forecast for this year is unchanged from April’s outlook, but the composition has changed, as it upgraded forecast for advanced economies and downgraded that for emerging market and developing economies.
The intensifying divergences largely stem from unequal vaccine access and varying capacities to provide policy support, according to IMF economists, who have called for, first and foremost, multilateral action to ensure rapid and worldwide access to vaccines.

TWO-TRACK PANDEMIC
The latest IMF projection showed that growth prospects for advanced economies this year have improved by 0.5 percentage point to reach 5.6 percent, while those for emerging market and developing economies are downgraded by 0.4 percentage point to 6.3 percent.
These revisions reflect to an important extent differences in pandemic developments as the Delta variant takes over, according to the WEO.
Close to 40 percent of the population in advanced economies have been fully vaccinated, compared with 11 percent in emerging market economies, and a tiny fraction in low-income developing countries, IMF Chief Economist Gita Gopinath told a virtual press briefing Tuesday.
“Faster-than-expected vaccination rates and return to normalcy have led to upgrades, while lack of access to vaccines and renewed waves of COVID-19 cases in some countries, notably India, have led to downgrades,” she said.
Gopinath also noted that divergences in policy support are a second source of the deepening divide, as advanced economies continued to roll out sizable fiscal support with 4.6 trillion U.S. dollars of announced pandemic-related measures available in 2021 and beyond.
On the other hand, in emerging market and developing economies, most measures expired in 2020, and they are looking to rebuild fiscal buffers, she said, adding that some emerging markets like Brazil, Hungary, Mexico, Russia and Turkey have begun raising monetary policy rates to head off upward price pressures.
“The developing countries are generally in continuing difficulty, with low vaccination coverage, high Delta variant (transmission), and little fiscal space. The low-income countries are limping,” Jeffrey Sachs, an economics professor at Columbia University and senior United Nations advisor, told Xinhua via email.
“We need G20 leadership,” said the renowned economist, urging the United States and China to enhance their cooperation on universal vaccine coverage, economic recovery, new massive lending to low-income countries, and a global green and digital growth path.
In response to a question from Xinhua at the press briefing, Gopinath said that the thing that needs to be done “first and foremost” is to make sure a billion vaccine doses are made available from surplus nations to the countries that need them now.
“About half a billion has been announced in terms of vaccines being provided, but we still need to close that gap,” said the IMF chief economist. “And also we need to make sure that the deliveries happen now as opposed to happen much later in the year or even into next year.”

DOWNSIDE RISKS REMAIN
“While more widespread vaccine access could improve the outlook, risks on balance are tilted to the downside,” according to the IMF, which estimated that the emergence of highly infectious virus variants could derail the recovery and wipe out 4.5 trillion dollars cumulatively from global gross domestic product by 2025.
In one downside scenario, new variants are assumed to lead to a new infection wave in emerging market and developing economies in the coming months, with tightening financial conditions amid concerns over inflation in advanced economies.
“As a result of that, emerging markets are dealt this double blow, and in that scenario, they could see significant losses in output over the coming years,” Petya Koeva Brooks, deputy director of the IMF’s Research Department, told Xinhua.
Nick Bennenbroek and Brendan McKenna, economists at Wells Fargo Securities, wrote in an analysis that they do not expect governments to reimpose widespread restrictions, nor do they see consumers voluntarily restricting their own activities to a significant degree in response to the latest COVID-19 developments.
They, however, warned that should the latest outbreak persist for an extended period, perhaps until the end of this year, “there would be a higher likelihood of governments reimposing restrictions and central banks delaying their tightening plans.”
Calling the Delta variant “an important concern,” Gopinath said it has led to the downgrades in emerging Asia, such as India, Indonesia and Malaysia, where recent infection waves are causing a drag on activity. Meanwhile, rising numbers of cases are seen in many parts of the world, including the United States.
“I think even though we have incorporated some of it into our forecast, there is still an important downside risk, depending upon how this evolves in the future,” Gopinath said.
The IMF also underscored the urgency to remove trade restrictions under current circumstances. Global trade volumes are projected to expand 9.7 percent in 2021, up by 1.3 percentage points from April projection, the WEO showed. This follows an 8.3-percent contraction in 2020.
“By and large, I think this is an area where we could all do better,” Brooks told Xinhua.
“The last thing that one needs at this stage of the recovery is trade tensions and anything related to that,” she added. MDT/Xinhua