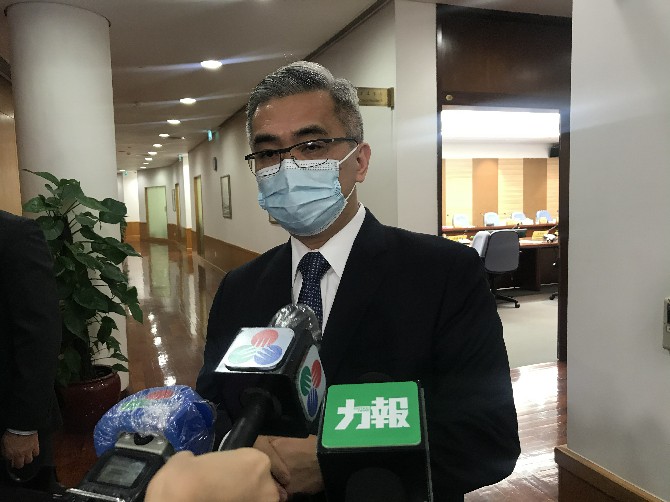 Foreigners who enter Macau illegally may be put in detention for a time in excess of 60 days, according to Secretary for Security Wong Sio Chak.
On the sidelines of yesterday’s meeting of the Second Standing Committee of the Legislative Assembly (AL), Wong explained to the media the government’s latest proposal in relation to an amendment of the law related to immigration affairs, specifically concerning unlawful entry and unlawful staying.
The current immigration law prescribes that undocumented immigrants (foreigners who enter Macau illegally or stay in Macau illegally) shall be detained prior to deportation for no longer than a maximum of 60 days. Under the current law, once the detainees finish the 60 days in custody, the Public Security Police Force (PSP) must release the undocumented immigrants. A document is then issued by the PSP, which acts as a temporary identification proof and an immigration bond and allows the released immigrants to stay in Macau while deportation proceedings are pending.
Earlier this month, the government’s latest amendment of the law was delivered to the Legislative Assembly (AL) in the hopes of rescinding limits on the length of pre-deportation detention to put unlawfully entrants to Macau in detention for longer, but for no more than 24 months under any circumstances.
“Under the current law, the [security force] can only arrest undocumented immigrants for 60 days. Some of these people would destroy their documents deliberately so that the police authority could not confirm their identity amid the deportation proceedings. As a result, the police authority is forced to issue a recognizance to the concerned individuals,” said Wong. “The staying of these individuals poses profound threats to the security of Macau.”
According to Wong, once the amendment is passed by the lawmakers and comes into effect, every time the security force wants to detain an undocumented immigrant for more than 60 days, the security authority shall apply to the prosecution authority for approval and the prosecution authority must obtain approval from the court should the security authority wish to pursue a longer detention period in relation to a specific individual.
Wong believes that imposing longer detention periods may put more pressure on immigrants who attempt to enter the city illegally.
Once the amendment is passed by the Legislative Assembly (AL) and the law comes into effect, it is likely that the government may need a bigger budget for “taking care” of the detainees as a consequence of the longer detention periods.
“The public money spent on the detainees mostly covers their three meals a day,” the Secretary said.
At present, Macau’s pre-deportation detention center holds approximately a “two-digit” number of immigrants, most of whom are from Southeast Asian countries.
The secretary affirmed that Macau’s detention facility provides sufficient space to hold illegal immigrants.