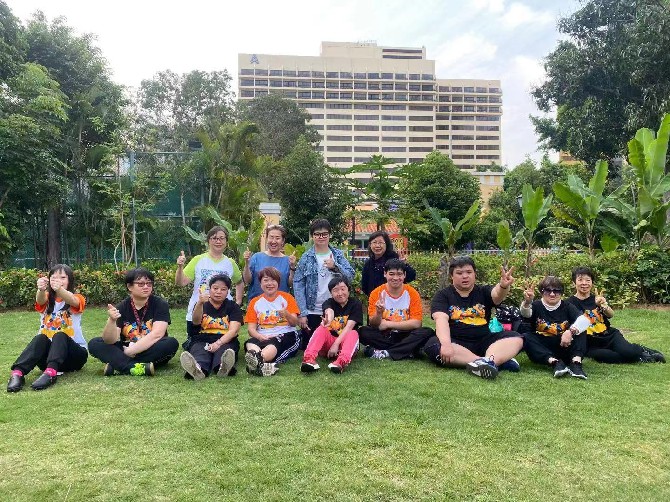 From afar, Ms. Cheng was looking at her daughter, Jackie, as she attended a lecture about event management.
Cheng had never seen Jackie, currently in her 30s, so upbeat and self-motivated until last month, when she started a public campaign honoring the principles of sustainability and inclusivity.
For most event organizers, putting a large-scale event together is no mean feat — let alone Jackie and her seven other teammates. The group are event planning rookies and are also people with developmental or intellectual disabilities.
Jackie went through a harsh childhood, having been bullied mercilessly by her classmates. Many times she came home with her hair glued together with chewing gum — just because she was “different” from the other kids. Even more traumatizing was the fact that teachers often turned a blind eye to the bullying. Later at Primary 5, Jackie was diagnosed with autism and dropped out of the school, which only catered to people without disabilities.
“I wanted to prove them wrong. I don’t want to be labelled as incapable [just because I have autism]. I want others to know that I can also be competent as long as I work hard,” Jackie once told her mother.
Cheng always knew that Jackie, in spite of her disability, could rise far above the limits that other people placed on her.
Cheng and Jackie’s passion for the fair treatment of people with autism drove them, alongside other parents of children with autism, to set up an organization titled Macau IC2 Association (IC2) in 2016, promoting equality in Macau. Over the past five years, IC2 established itself as a received NGO that has been sending humanitarian aid to other disabled individuals in Macau and beyond.
In 2021, members of IC2 are determined to take the challenge up another notch and host their very first event, titled “Inclusive, healthy and sustainable lifestyle on World Earth Day.”
The idea of launching an event began growing just a month ago on March 1, when parents of IC2 had their habitual breakfast meeting. Together, they came up with the idea of establishing an annual ritual of “tree-planting”. This came from IC2’s long-term partner China Shenmo Star River Public Welfare Alliance, a mainland organization that has been established in Beijing for 23 years and is dedicated to offering support to people with disabilities.
They timed the event to take place on April 22 in order to coincide with World Earth Day, to promote a sustainable lifestyle and equal participation for people with disabilities. They bundled the tree-planting activity with “pickleball” games, a sport similar to tennis commonly played in the US, to make the event more enticing.
Though they are newcomers to event management, Jackie and her teammates have remained resolute, as they have had a professional back up-turned-coach for this project — Ada Lo. Lo is a beloved figure in the arenas of charity and Meetings, Incentives, Conferences & Exhibitions (MICE).
For many years, Lo, founder and managing director of a MICE consultant agency, has also served in many important roles in Macau, including prominent member of the SAR government’s Rehabilitation Affairs Committee, secretary-general of Special Olympics Macau, and more.
Lo is recognized in Macau for her long-time advocacy for the rights of people with disabilities. Since hearing about the IC2 parents’ idea of hosting a tree-planting event at the breakfast meeting, Lo has championed their good cause without hesitation. She intends to convert their intention into action by tapping into her expertise. Lo now helms the event. 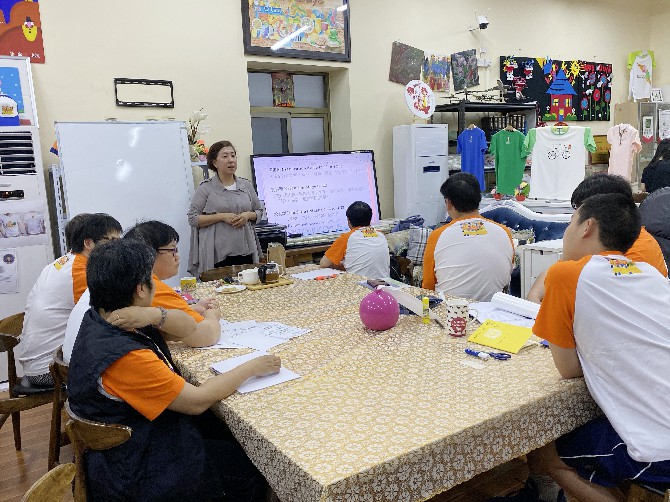 Learn to Decide
“For the past 17 years, I have been undertaking endeavors for people with intellectual disabilities [in Macau],” Lo told the Times.
“But it dawned on us one day that these individuals were usually not up to participating in the events that were put together by us. I learned that I should let them control their own life, let them decide the services they desire and let them host an event they like,” she remarked.
Maintaining individuals with disabilities in a position in which they are in charge of their lives is an increasingly popular trend among rehabilitation services nowadays, Lo pointed out. Just like every member of society, people with autism and intellectual disabilities are capable of making informed decisions through learning and practice.
Decision-making is an empowering experience that enables people with disabilities to be more confident, independent and well-positioned to resist bullying.
Supporting disabled people to make responsible choices is also the underlying motivation for the parents who set up IC2 in the first place, Lo noted.
Budding Movers & Shakers
In a group interview with the Times, nine IC2 members who are engaging in this project agreed that the event would have never happened if it were not for their instructor Ada Lo, who has instructed them with her knowledge about event management.
Lo has moulded them into shape as capable event organizers, who have gotten the hang of design and branding, forging partnerships and sponsorships, and coordinating the logistics of an event.
Most of the proposals put forward were the result of their own “decisions,” Lo said, ranging from the designs of the poster to the invitation letter and the event site.
Acting as a supporter and facilitator, Lo leveraged her expertise and well-connected network across Macau to help make the event go from good to great.
In just a few days, Lo secured a partnership with Artyzen Grand Lapa Macau, who agreed to provide venues and supporting services for the World Earth Day Event. Also, as a president of Macao Dragon Sport Association, Lo invited the association’s young athletes to demonstrate a pickleball game to bring a dose of energy and excitement to the day.
She also brought in Green Future, a local NGO that advocates for green lifestyles as the event’s partner to plant trees in the garden at the Artyzen Grand Lapa Macau. Representatives from the Shenmo Star River Public Welfare Alliance, the brainchild of the tree-planting endeavour, are also invited to attend the event to commemorate World Earth Day.

I CAN DO IT TOO
“The members of IC2 are some skilful and competent individuals. Despite their disabilities, they have had a series of remarkable accomplishments for the past five years since IC2 was established,” Lo commented.
Her remarks were bolstered by a previous IC2’s project, in which the members went to a suburb in China and helped establish a dedicated center catering to people with disabilities in the community.
“They have had lived up to their long-established ethos, which is to reach out to and improve the lives of others in need by passing down their experiences and knowledge,” Lo told the Times.
She has complete confidence in the members of IC2, believing they can pull the upcoming World Earth Day Event off on their very own.
When asked whether they felt intimidated about bringing together such a massive public event, they all said “no” in unison.
“It is not intimidating. I would say it is exciting, as the event is just around the corner,” Tam Kai Kei, a board member of IC2 and MC for the event, told the Times.
‘IC2’ is an acronym for “I can do it, too” – a tagline that has been exemplified by the members’ determination and ability to fight for a more equal community in Macau.
Jackie and her mother Cheng knew this upcoming event would be one of the many supposed impossibilities they would soon overcome.
“I wish that one day Jackie can learn to be self-sufficient so that she can take care of herself even when I’m not around anymore,” Cheng said as she looked at her daughter, who was enraptured by Lo’s lecture.
This may likely not happen in the coming days. But Cheng is certain that Jackie will be fully independent one day by starting as small, and learning how to make her own decisions.
IC2 currently has upwards of 150 members.

*Macau Daily Times is the official media partner of the event.