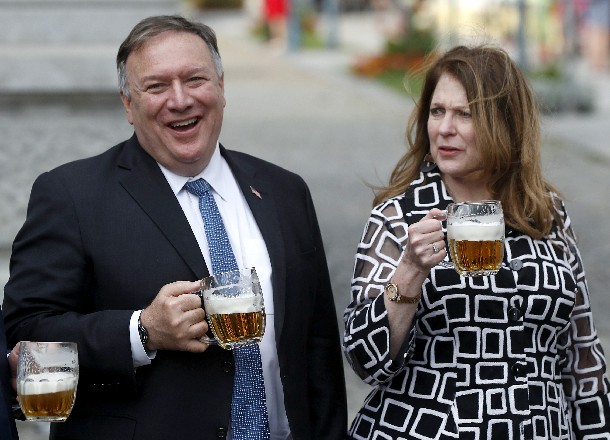 U.S. Secretary of State Mike Pompeo and his wife Susan Pompeo hold a glass of beer during a visit at a brewery in Pilsen

U.S. Secretary of State Mike Pompeo warned early yesterday [Macau time] of a rise in authoritarianism led by Russia, China and Iran that threatens freedoms around the world.
Opening a four-nation tour of eastern and central Europe in the Czech Republic, Pompeo paid tribute to American forces that liberated western Czechoslovakia in 1945 and lauded values shared by Americans and Czechs.
Visiting the “Thank You, America” monument in the city of Pilsen, Pompeo urged continued vigilance to protect democratic gains made after World War II and then again after the collapse of the Soviet Union. Pompeo did not, however, mention unrest and concerns about significant democratic backsliding in nearby Belarus after elections there on Sunday.
“It is worth remembering, even as we celebrate, that because authoritarianism is still alive in Beijing, in Moscow and in Tehran there remains work to do,” he said in a brief speech at the monument before observing a wreath laying with the Czech foreign minister.
Earlier, Pompeo visited the Patton Museum in Pilsen, which commemorates the Army general’s WWII leadership.
Pompeo plans to use his visit, which continues Wednesday, to push his hosts to counter Russian and Chinese influence. Russia and China are active and seeking greater roles throughout the continent in the energy, infrastructure and telecommunications sectors, a trend the United States is keen to reverse.
In his talks, Pompeo will likely face questions about the Trump administration’s decision to reduce the U.S. military presence in Germany. Pompeo did not address the matter in his comments. President Donald Trump wants to withdraw thousands of American troops from bases in Germany and redeploy some of them eastward, including to neighboring Poland, the last stop on Pompeo’s week-long trip.
Two of Pompeo’s other three destinations — the Czech Republic and Austria — also share a border with Germany, while Slovakia borders Austria, the Czech Republic and Poland. Germany is pointedly not on Pompeo’s itinerary.
In Prague yesterday, Pompeo will meet Czech President Milos Zeman and Prime Minister Andrej Babis to discuss nuclear energy cooperation and “efforts to counter malign actions of Russia and communist China,” the State Department said.
Energy and the tenuous political situation in the Balkans will top Pompeo’s agenda with Slovenian officials in Ljubljana, where he is expected to deliver a statement with the foreign minister about the security of 5G networks, the department said.
In Vienna, Pompeo will meet Austrian Chancellor Sebastian Kurz to review trade relations and regional security. Pompeo will also hold talks with the head of the Vienna-based U.N. nuclear watchdog, the International Atomic Energy Agency, which is charged with monitoring Iran’s adherence to the 2015 nuclear deal from which the U.S. has withdrawn.
The Trump administration is trying to convince other members of the U.N. Security Council to indefinitely extend an arms embargo on Iran that is due to expire in October, under terms of the nuclear deal.
In Warsaw, Poland, Pompeo plans talks with President Andrzej Duda, who recently won a narrow reelection after a bitter campaign that concerned human rights advocates and others. MATTHEW LEE, PILSEN, AP