In ‘Knives Out,’ a whodunit for the Trump era 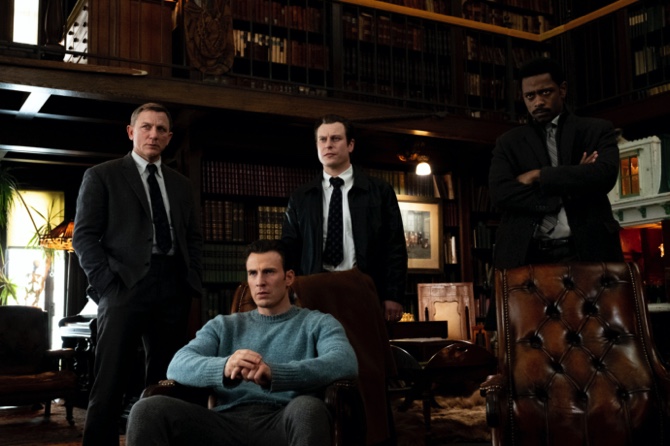 From left: Daniel Craig Chris Evans, Noah Segan and Lakeith Stanfield in a scene from “Knives Out”

Rian Johnson’s “Knives Out” unravels not just a good old-fashioned murder mystery but the very fabric of the whodunit, pulling at loose threads until it has intricately, devilishly woven together something new and exceedingly delightful.

For all the detective tales that dot television screens, the Agatha Christie-styled whodunit has gone curiously absent from movie theaters. The nostalgia-driven “Murder on Orient Express” (2017), popular as it was, didn’t do much to dispel the idea that the genre has essentially moved into retirement, content to sit out its days in a warm puffy armchair, occasionally dusting itself off for a remake.

But Johnson has since his 2005 neo-noir debut “Brick” shown a rare cunning for enlivening old genres with densely plotted deconstruction. He makes very clever movies (“Looper,” “Star Wars: The Last Jedi”) that sometimes, like in the madcap caper “The Brothers Bloom,” verge on showy overelaboration, of being too much.

But in the whodunit, too much is usually a good thing. Give us all the movie stars, plot twists and murder weapons you can find. When done well, there is almost nothing better. And “Knives Out,” while it takes a little while to find its stride, sticks the landing, right up to its doozy of a last shot. The whodunit turns out not only to still have a few moves left but to be downright acrobatic.

The film begins like many before it: with a dead body that needs accounting for. Harlan Thrombey (Christopher Plummer), a bestselling mystery writer, is found with his throat cut in a small upstairs room in his sprawling Victorian mansion. Production designer David Crank deserves much credit for the film’s fabulously ornate and much-paneled setting — a Clue board come to life and a home that could rival the modernist abode of “Parasite” for movie house of the year.

Thrombey is extremely wealthy with an expansive family of spoon-fed, entitled eccentrics that would likely mix well with the dynasty of HBO’s “Succession.” And as much intrigue as there is about Harlan’s death, for his children there’s even more about his inheritance. There’s his relator daughter Linda (Jamie Lee Curtis) and her cheating husband Richard (Don Johnson), a vocal Trump supporter; his son Walt (a sweater-wearing Michael Shannon) who runs his father’s publishing house and is married to Joni (Toni Collette); and his grandson Ransom (Chris Evans), the arrogant black sheep of the family.

There are others, too, most notably Harlan’s trusted caregiver Marta (Ana de Armas). The Thrombeys casually refer to her as “the help” and, in a running gag, are all over the map when it comes to her native South American country. A deeper political dimension slowly takes shape as the family’s cavalier indifference to Marta plays a role in the movie’s unspooling mysteries. Juggling themes of class privilege, immigration and ethnocentricity, “Knives Out” is a whodunit for the Trump era.

Some mysteries first submerge themselves in set-up, the crime in question and the entrance of its central detective. Johnson is too restless for such an approach. He favors flashbacks, by the boat load, to go along with elaborate plot mechanics of reversals and perspective switcheroos. That gives “Knives Out” a somewhat clunky and imperfectly paced first act, something Johnson makes up for with the payoff of his finale. But for a movie with so many fine actors having so much fun, we get surprisingly little of the Thrombeys as a whole.

Instead, our detective calls almost immediately. Enter Benoit Blanc (Daniel Craig), a flamboyant Louisiana investigator of such renown that he’s already been profiled in the New Yorker as “the last of the gentleman sleuths.” Even with such immaculate set dressing all around him (the mystery writer’s house is decorated throughout with murder weapons, including a throne of knives), Craig still manages to chew plenty of scenery with his heavily accented Southern-style Poirot. One calls him “Foghorn Leghorn,” another “CSI: KFC.” He’s accompanied by another detective (an underused Lakeith Stanfield) but he quickly makes Marta his sidekick; she has a useful aversion to lies, throwing up every time she tells one.

There isn’t much that isn’t knowing in Johnson’s dialogue. He delights in playing by the genre’s rules and remaking them at once. There are winking references here to “Hamilton” and “Baby Driver,” and “Knives Out” more than once risks being overwhelmed by self-satisfaction.

But “Knives Out,” in the end, believes earnestly in the whodunit, it just wants to turn it inside out. To say more about that would spoil the fun. But keep an eye here, and elsewhere, on de Armas. The “Blade Runner 2049” actress (soon to be seen in the next James Bond film, also with Craig) isn’t the biggest star in a film awash with A-listers. But with neither cloak nor dagger, she seizes “Knives Out.” It’s hers. Jake Coyle, AP Film Writer

“Knives Out,” a Lionsgate release, is rated PG-13 by the Motion Picture Association of America for thematic content, some disturbing images and strong language. Running time: 126 minutes.