In ‘The Two Popes,’ a buddy movie investments 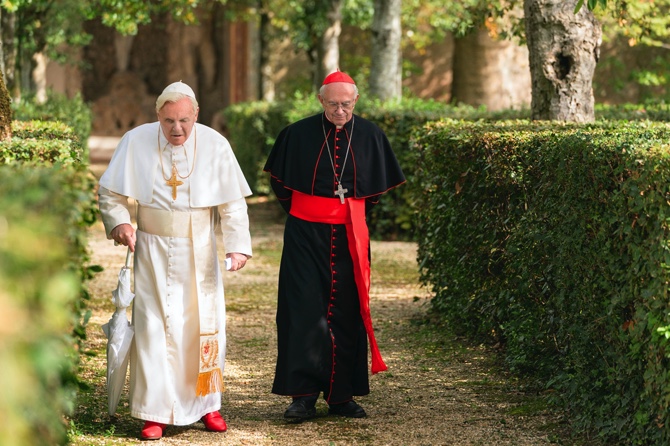 Believers of all religions can agree on one thing: the Vatican is an unlikely place for a bromance.

The novelty of Fernando Meirelles’ “The Two Popes” is right there in its title. There has only been one leader of the Roman Catholic Church going back centuries except in trying times of, you know, schism. But Meirelles’ film, from a script by Anthony McCarten (“Darkest Hour,” “The Theory of Everything”) concerns a real moment in recent history during an unusual Vatican transition.

In 2013, Pope Benedict XVI, formerly Cardinal Joseph Ratzinger (played by Anthony Hopkins in the film), resigned from the papacy, the first to do so since the 15th century. “The Two Popes” takes place just before this momentous decision, as Pope Benedict is mulling it over. In the film, he summons the Argentinian Cardinal Jorge Bergoglio (Jonathan Pryce), his eventual successor as Pope Francis, from Buenos Aires to Rome for a tête-à-tête, or, if you will, a pope-à-pope.

The whole scenario is a work of imagination. There are few institutions with more private innerworkings than the Vatican. Usually, we get little more than a puff of white smoke. “The Two Popes” aims to go not just inside the Church but imagine a deep dialogue between the two pontiffs. “The Two Popes” is a fantasy of impossible intimacy.

It’s also a riveting two-hander paced by two fabulous actors in ping-ponging conversation. They are opposites: Pope Benedict is a conservative, a German and a loner who eats dinner in solitude. Bergoglio is a reformer, an Argentine, an avid soccer watcher and, gasp, an ABBA listener. When they meet at the papal summer retreat, their conversation quickly turns into a theological volley on matters of sacrament, homosexuality and footwear.

“We are no longer part of this world,” Bergoglio says of the Church. “Change is compromise,” retorts Benedict. “Nothing is static in nature,” replies Bergoglio. “God is unchanging,” says Benedict.

Meirelles, the Brazilian filmmaker of “City of God” and “The Constant Gardner,” captures their first meeting while walking the estate’s grounds with amplified bird song all around them. They may disagree on nearly everything, but their dichotomy is a kind of harmony.

Their divisions, of course, reflect those nearly everywhere else today, between progress and retreat. And there is considerable comfort in exploring opposite perspectives not through Congressional or Parliamentary rivals but between two kindly old men in a garden. It’s nice to think that such barriers can be broken down amicably — as they are in “The Two Popes” — over pizza and Fanta.

For that to happen, “The Two Popes” pushes some darker concerns to the side while magnifying others. Sexual abuse among the clergy is briefly discussed before it largely recedes, though you could argue the subject hovers just beneath their talks as the unspoken impetus for Benedict’s retirement.

Who’s side we should be on is never in doubt. All of the life force is with Bergoglio, an almost saintly figure in the film, as he is in many other representations, too. But it’s the lively, stimulating interplay between Pryce (radiant) and Hopkins (exquisitely crafty) that gives “The Two Popes” its forward movement, propelling the film less by intellectual debate than by the thrall of an unfolding friendship.

As their conversation continues in the Sistine Chapel (recreated at Italy’s Cinecitta Studios), “The Two Popes” turns into a movie not about a power struggle, at all, but a grappling of faith. Benedict and Bergoglio dispense with their divisions and turn inward in self-reflection, revealing their own wresting with doubt, fallibility and faith.

This section of soul searching includes a lengthy flashback to Bergoglio’s potentially complicit inaction during the junta rule of late ‘70s, early ‘80s Argentina. The look backward adds greater dimension to Bergoglio’s character, but it hampers the film’s locked-in double act. Benedict’s reflections — including an achingly tender confession he gives to Bergoglio — come without flashback and are all the more powerful because of it.

“The Two Popes” might promulgate an optimistic portrait of the Catholic Church and its leaders. But in these sweetly sincere scenes, you forget Benedict and Bergoglio are pontiff and pontiff-to-be. And the moment of respite from the world’s arguments and divisions feels like a benediction. Jake Coyle, AP Film Writer

“The Two Popes,” a Netflix release, is rated PG-13 by the Motion Picture Association of America for thematic content and some disturbing violent images. Running time: 126 minutes.