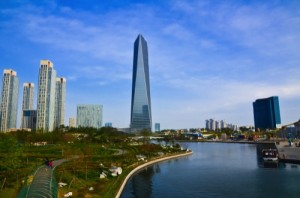 Incheon, a port city west of Seoul that two years ago ran out of money to pay its workers, is using borrowed funds to transform into a modern cultural, sporting and trade hub. The bond market likes what it sees.
The extra yield investors demand to hold five-year notes of Incheon Development & Tourism Corp., the AA+ rated project arm of the local government, has dropped 30 basis points to 109 on July 29 since May 30, according to Koscom Corp., which compiled data from bond pricing companies. The rally follows a May law change that says local governments must back securities issued by statutory bodies. The spread on similar-rated corporate debt widened by two basis points in the period.
Incheon Metropolitan City, which owns IDTC, is spending billions of dollars redeveloping entire neighborhoods, hosting September’s Asian Games and encouraging iconic buildings, including an “invisible” skyscraper and the Tri-Bowl cultural center. The National Assembly in May changed the classification of debt issued by local public companies such as IDTC from corporate bonds to so-called special bonds, which are government backed. The change boosted the amount money managers can legally hold, to 30 percent of a portfolio from 10 percent. 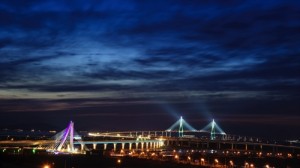 “The company’s investor pool was widened after the bonds were reclassified,” said Jeong Dae Ho, credit analyst at KB Investment & Securities Co. in Seoul. “Investors are still hunting yield so that’s making IDTC’s bonds rally regardless of fundamentals.”
The company’s notes are also benefiting from a government effort to cut debt at state-owned enterprises, which has reduced the number of new issues while forcing SOEs to improve their balance sheets.
By making local governments responsible for the debt, President Park Geun Hye’s administration wants to make them more mindful of risk while also reducing the borrowing costs for entities like IDTC, according to a May 2 statement from the Ministry of Security and Public Administration.
“Because its business is related to construction, it’s not easy to improve its credit fundamentals in a short time,” Park Cheong Ho, credit analyst at Dongbu Securities Co. in Seoul. “Investors like insurers may feel more comfortable with its bonds since reclassification.”
IDTC had debts of 7.1 trillion won at the end of March, from 4.8 trillion won at the end of 2010. The company accounted for about 80 percent of Incheon Metropolitan City’s total debt at the end of last year.
Government finances in the city of 2.9 million people were so bad that in April 2012 it couldn’t pay its workers on time, the Korea Times reported.
Incheon budgeted about 1.7 trillion won for building stadiums for the Asian Games, which open on Sept. 19. The city sold more than 1 trillion won of debt since 2009 for stadium construction, according to a Feb. 5 statement.
By comparison, China’s southern city of Guangzhou spent 122 billion yuan (USD19.8 billion) to host the 2010 edition of the games. That was more than the budget for the 2012 London Olympics.
Sales at development projects in Incheon are expected to pick up as Asia’s fourth-largest economy seeks to revive a stagnant property market, said Kim Eun Gie, credit analyst at NH Investment & Securities Co. in Seoul. The government loosened home-loan restrictions, as part of a stimulus package aimed at spurring economic growth.
IDTC is building more than 2,000 homes in Songdo district, where the corporation oversaw the building of the Tri-Bowl, an aluminum-clad multi-use exhibition center in the shadow of the Northeast Asia Trade Tower, South Korea’s tallest building.
The nation also approved in March the construction in Incheon of its first foreign-owned casino resort, a 2.3 trillion won joint venture between Las Vegas-based Caesars Entertainment Corp. and Lippo Ltd., a Hong Kong-listed property developer. The company expects the project to open before the 2018 Pyeongchang Winter Olympics, according to a July 7 statement from IDTC.
South Korea may offer the biggest threat to Macau gaming by 2018, given its proximity to many wealthy regions of China, and the scale of its potential new supply, analysts led by Anthony Wong at UBS Securities Asia Ltd. wrote in a July 29 note. The nation could add 5,000 casino rooms, 1,000 casino tables by 2018 if all proposed supply materializes
“With the casino resort’s approval and the government’s measures to boost the property market, IDTC’s business may be gaining momentum,” NH Investment’s Kim said. “Expectations for government support increased after the bond status was upgraded. So these notes can be good investments for yield-hungry investors.” Bloomberg