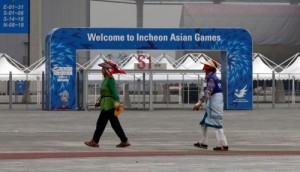 As the port city of Incheon prepares to host the Asian Games, some are worried about what happens when the party leaves town.
Aside from looming potential debt, the games will also double as an expensive rehearsal for the 2018 Winter Olympics at the ski resort town of Pyeongchang. Incheon could either be a model for Pyeongchang or a cautionary tale.
Nearly 10,000 athletes will compete across 42 sports after the event starts at the end of next week. China’s dominant gymnasts and swimmers will be there, as will more anonymous athletes from across the continent to the Middle East. Of special interest for South Korea’s media are the 150 North Korean athletes competing in 14 sports.
But behind the scenes, the games’ costs have caused unease. Incheon had the highest rate of debt among South Korea’s six metropolitan cities last year, and spending lavishly on the Asian Games and a new subway line has been blamed for deteriorating finances.
Politicians, including Incheon Mayor Yoo Jeong-bok, say the long-term gains in tourism will help offset the costs by introducing the city to the world as a tourist destination. But some wonder what happens when the city’s debt burden grows after the games and many of the new sports facilities are no longer of use.
Kim Young-soo, chief of the Incheon Asian Games’ organizing committee, said officials had to work with less financial support from the central government than was the case at previous large sporting events. But he says the games will still be “smart, compact and well-organized.”
Incheon, west of Seoul, is South Korea’s third largest city, with a population of 3 million. It was the site of a daring amphibious landing that turned the tide in the 1950-53 Korean War.
Formerly a bleak industrial hub, the city now boasts the Incheon International Airport, one of the world’s busiest, and the ultra-modern Songdo business district, an aspiring trade hub built on reclaimed land.
Organizers want to draw 200,000 visitors to the games, which they hope will update the city’s global image.
The main stadium was one of the 17 new venues built for the games. There’s also a state-of-the-art aquatics center, a new golf course built over an old landfill and a cricket field.
The opening and closing ceremonies will be directed by veteran South Korea movie director Im Kwon-taek and feature high-profile artists including opera singer Sumi Jo, Chinese pianist Yang Yang and YouTube rapper PSY.
“The Asian Games will be a good opportunity to uplift a country that was saddened by the Sewol ferry incident,” said Korean Olympic Committee President Kim Jung-haeng, referring to a ferry disaster that killed more than 300 people off South Korea’s southwestern coast in April. “Hosting a large international event such as the Asian Games will help the country prepare for the Pyeongchang Olympics.”
Members of Pyeongchang’s organizing committee will be in Incheon to observe how things run. Incheon will be scrutinized for how it manages the games and what it does with the expensive facilities after the games end.
South Korea held the Summer Olympics in Seoul in 1988, co-hosted the soccer World Cup with Japan in 2002 and staged the Asian Games at Seoul in 1986 and Busan in 2002. Each event was touted by the government as a celebration of the nation’s economic prosperity and rising international influence.
The public sentiment surrounding big sporting events is no longer unanimously positive. Some see them as a huge waste of money.
The city of Seoul said it lost nearly 20 billion won ($19.59 million) over the three years up to 2013 maintaining Seoul Olympic Stadium, the main venue of the 1988 Olympics that is now seldom used.
The small southeastern town of Yeongnam said it lost around 190 billion won (USD185.34 million) in the four years it hosted the Formula One Korean Grand Prix. A dispute with Formula One Management over hosting fees led to the event being removed this season.
Incheon has struggled to pay for the Asian Games since it won the bid to host them in 2007. The low point came in May 2012 when former Incheon Mayor Song Young-gil threatened to renounce the city’s rights to host unless the central government took on a larger share of the 2.11 trillion won ($2.05 billion) cost. Incheon kept the Asian Games after the central government increased its burden, although Incheon still is paying for 70 percent of the bill.
The city plans to cover some of the costs by converting a number of stadiums to office buildings, shopping malls and multiplex movie theaters.
Critics, however, point to the potential of the Incheon games resembling those from the 1976 Montreal Olympics, which took 30 years to repay, or more recent ones in Athens and Beijing where facilities have largely become white elephants.
Gangwon Province, which governs Olympics-host Pyeongchang, has also had financial problems, struggling to repay the debt created from spending more than 1.68 trillion won ($1.63 billion) on a ski resort that will be the main venue of the 2018 Winter Games.
Kim from the Incheon organizing committee says that the Asian Games’ success will be mostly measured by whether it avoids a deficit. A big worry is the slow pace in ticket sales. Organizers had hoped to sell about 70 percent of the tickets before the opening ceremony, but have so far struggled to sell 30 percent.
Rival North Korea’s decision not to send its mostly female cheerleaders known as the “squad of beauties” in the South won’t help sales. Pyongyang yanked the squad after it said it argued with Seoul over the size of North Korea’s delegations, the cost of the stay for the cheerleaders and the size of North Korea’s flags.
The two most populous nations in the world — China and India — will send two of the largest teams to Incheon. Olympic champion swimmers Sun Yang and Ye Shiwen will lead a 900-strong Chinese team while India will have 662 athletes. Kim Tong-Hyung, Seoul, AP