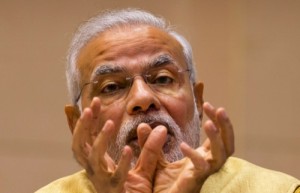 Indian Prime Minister Narendra Modi addresses business leaders as he launches his ‘Make in India’ initiative, prior to his scheduled departure to the U.S. in New Delhi

When India’s prime minister visits the United States this week, he’ll see a welcome normally reserved for rock stars — a sold-out appearance at Madison Square Garden. It’s a stunning rise for a former tea seller who rose to the country’s top job and was once denied a U.S. visa.
More than 18,000 people, most of them Indian-
Americans, are expected to pack the New York City arena and thousands more watch on giant screens in Times Square as Narendra Modi makes a speech during his first visit to the U.S.
The trip comes on the back of a spectacular electoral victory that has catapulted Modi, once an international pariah for his alleged complicity in sectarian violence in his home state of Gujarat, to a leader the world is eagerly courting.
President Barack Obama was among the first Western leaders to call and congratulate Modi when his Hindu nationalist Bharatiya Janata Party swept into power in May.
Modi’s acceptance of Obama’s invitation also signifies that he has moved beyond the resentment of being denied a visa in 2005, three years after religious riots killed more than 1,000 Muslims in the western state where he was the top elected official.
“The prime minister is always looking forward, not back,” India’s foreign ministry spokesman Syed Akbaruddin said at a recent media briefing.
Modi is visiting at a time of strained U.S.-India relations, especially following last year’s arrest and strip search of an Indian diplomat in New York on visa fraud charges.
With both sides hoping to reset that relationship, Modi’s five-day trip starting today is tightly packed: He will be meeting Obama and a slew of top American officials, addressing the U.N. General Assembly, interacting with the heads of major U.S. companies and influential Indian-Americans.
At the heart of Modi’s discussions with U.S. political and business leaders will be how the two sides can boost their respective economies, defense cooperation, the future of Afghanistan and the crisis in the Middle East.
When Obama visited India in 2010, he had called the U.S.-India relationship the “defining partnership of the 21st century.”
Their ties since then have been lukewarm at best.
While military cooperation and U.S. defense sales have grown, and two-way trade is now around     USD100 billion, the economic relationship has been rocky. Washington has been frustrated by India’s failure to open up its economy to more foreign investors and address complaints over intellectual property violations.
Both Obama and Modi “want to repair the damage to the relationship in the last couple of years, and then to look at the future,” said Lalit Mansingh, India’s former ambassador to the U.S.
Backed by a strong mandate, Modi is telling the world that “we are now looking at partners in progress. America had been so far on the giving end,” Mansingh said.
“In Modi, there is a desire to enhance the prestige of India,” he said. “He will urge countries to take India more seriously.” Muneeza Naqvi, New Delhi, AP