Indian students face off with police amid fee protest 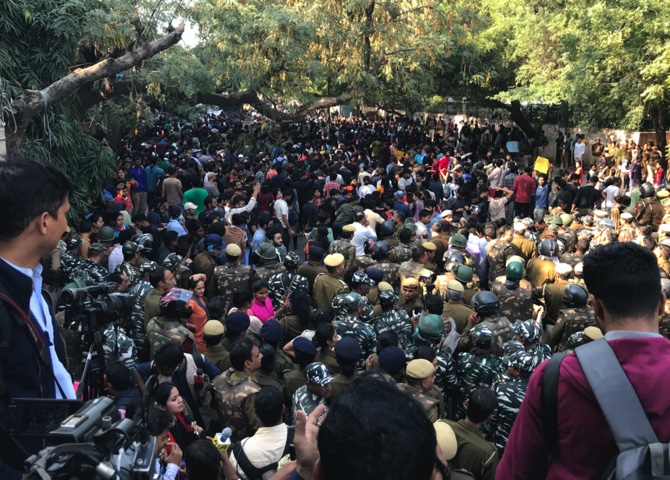 Hundreds of students from a New Delhi university faced off yesterday with police, who stopped their march toward Parliament to protest increased student housing fees.

The Jawaharlal Nehru University Students’ Union said in a statement that the students were attacked by the police during the protest.

“The police used brutal force to disrupt our peaceful march and several students have been injured,” the statement said.

The students wanted to appeal to lawmakers to intervene in their university’s decision to hike the fees, which they have been protesting for more than two weeks. Last week, hundreds of protesting students clashed with the police during the university’s graduation ceremony.

Rent for a single-bed room was increased to the equivalent of more than $8 per month from less than $1 per month. The security deposit more than doubled to more than $160.

Many students said they fear the fee structure would make education inaccessible to underprivileged students.

“I am the first from my family to study at a university. By raising housing fees, the university administration is putting a price on affordable education,” said Jyoti Sharma, a student at the march.

Students held signs at the march reading “Save public education” and “Ensure affordable hostels for all.”

“A peaceful protest march to Parliament against the unprecedented fee hikes is being forcibly stopped by the police. Strongly condemn this denial of basic democratic right to protest,” he tweeted.

The students marched despite the university saying it would partially roll back the fees.

“The students will not pay the increased fee,” said Ashutosh Verma, a student. AP