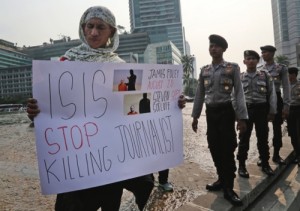 A man holds a poster as police officers stand watch during a rally against the Islamic State group, in Jakarta, on Sept. 5, 2014

Indonesia’s elite anti-terrorism squad arrested seven suspected militants, including four Turks believed to be planning to join a jihadist group in eastern Indonesia with possible links to the Islamic State group, police said yesterday.
The four Turkish men were captured late Saturday in Parigi Moutong town in Central Sulawesi province on their way to Poso, a neighboring mountainous district considered to be Indonesia’s terrorist hotbed, said national police spokesman Brig. Gen. Boy Rafli Amar.
He said authorities were tipped to the men’s whereabouts after police arrested three Indonesian suspected militants hours earlier during a separate raid near Parigi Mountong to search for the country’s most wanted terrorist suspect, Abu Wardah Santoso. Police seized Islamic State symbols and documents in that raid, Amar said.
Santoso is sought in connection with several attacks on Java island and Poso, where a Muslim-Christian conflict killed at least 1,000 people from 1998 to 2002. He also faces charges of running a terrorist training camp.
Amar said that all of the suspects were flown to the capital, Jakarta, yesterday and that police were questioning them to determine their possible ties to terrorism and international jihadist groups.
“We have strong indications that the four Turkish men are part of an international jihadist cell,” Amar said without elaborating.
The government has said some Indonesians have traveled to Syria and Iraq to fight with international jihadists and is concerned about militants returning from there. AP