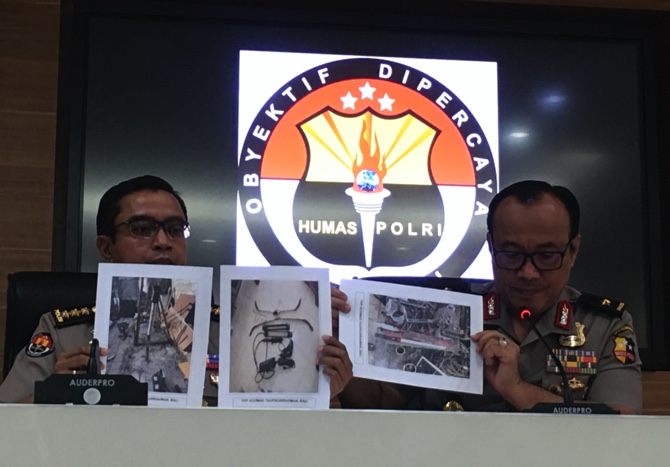 Indonesia’s elite anti-terrorism unit went on a busy 24-hour spree to root out suspected Islamic militants ahead of a presidential inauguration this weekend that will be attended by Asian leaders and Western envoys.

At least 40 suspects have been detained by the counterterrorism squad, known as Densus 88, in eight provinces, including four who were captured yesterday, national police spokesman Dedi Prasetyo said. The sweep followed a tipoff about possible attacks against police and places of worship in several areas.

Six of the arrested militants, including a woman, were presented in a news conference yesterday in orange detainee shirts and under heavy guard at the police headquarters. They were not identified by police, who also displayed explosive chemicals for bomb-making, knives, jihadi books, airsoft guns and rifles with silencers and sniper scopes they said were seized from the suspects.

Another police spokesman, Muhammad Iqbal, said Wednesday among the arrested suspects were two female police officers who have been radicalized and were willing to be suicide bombers.

The arrests follow an attack last week in which a militant stabbed Indonesia’s top security minister, Wiranto, who is recovering from his wounds. A husband and wife were arrested in that attack. President Joko Widodo, who will take the oath of the office on Sunday at a ceremony in the capital, Jakarta, ordered government forces to hunt down the militant networks responsible for the attack.

Wiranto, a local police chief and a third man were wounded in the broad daylight attack in Banten province last Thursday by suspected militant Syahril Alamsyah and his wife, Fitria Andriana. Both are believed to be members of a local affiliate of the Islamic State group known as the Jemaah Anshorut Daulah, or JAD.

Prasetyo said the arrested husband, known as Abu Rara, would face heavier sanctions for handing a knife to his 15-year-old daughter to help assault the police. The child declined out of fear.

Indonesia, the world’s most populous Muslim nation, has been battling militants since bombings on the resort island of Bali in 2002 killed 202 people, mostly foreign tourists. Attacks aimed at foreigners have been largely replaced in recent years by smaller, less deadly strikes targeting the government, mainly police and anti-terrorism forces and local “infidels.”

In May last year, two families carried out suicide bombings at churches in Indonesia’s second-largest city, Surabaya, killing a dozen people and two young girls whose parents had involved them in one of the attacks. Police said the father of the two girls was the leader of a cell in a larger militant network that claimed allegiance to IS.

The inauguration of Widodo, who won a second term with 55.5% of the vote in the April 17 election, will be attended by Southeast Asian leaders and Australia’s Prime Minister Scott Morrison.

Prasetyo said 31,000 security personnel were being deployed to secure the capital during the inauguration, though there has been no warning of a possible attack.

“The arrested suspects planned to attack police and worship places instead,” Prasetyo said.

He said police were hunting down other suspected militants, mostly participants in a social media chat group who are believed to be linked to JAD.

Police have seized 10 homemade pipe bombs believed to be intended for suicide attacks, chemicals for use in explosives, airsoft guns, knives, documents on planned attacks, jihadi books, laptops and cellphones in separate raids.

In West Java’s Cirebon district, investigators found that three of the suspects had been working on a chemical bomb containing methanol, urea fertilizer and rosary pea seeds, which are the main ingredient of abrin, an extremely toxic poison, Prasetyo said. Niniek Karmini, Jakarta, AP