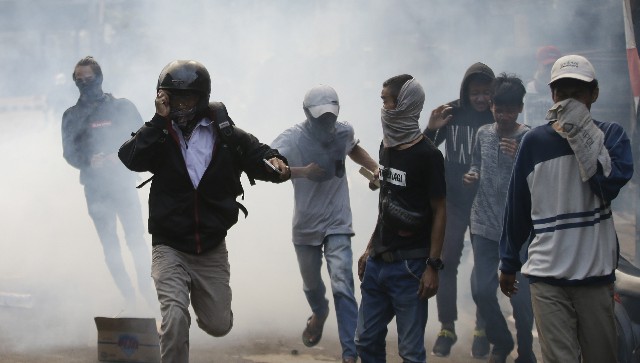 Indonesian riot police shot multiple rounds of tear gas at thousands of stone-throwing students who attempted to reach Parliament in Jakarta yesterday to protest a new law that critics say cripples the country’s anti-corruption agency.
Police said more than 300 students and police officers were treated in hospitals for injuries suffered in a similar protest in the same area the previous day.
The demonstrators are enraged that Parliament passed the law last week to reduce the authority of the Corruption Eradication Commission, a key body in fighting endemic graft in the country.
Police fired tear gas at protesters from several high schools yesterday afternoon as they tried to approach Parliament, turning nearby roads into a smoke-filled battleground. Protesters fought back, hurling rocks and bottles at riot police and setting fires to a nearby bus stop.
Clashes between protesters and police also occurred in other cities, including Padang, Palu, Garut and Bogor.
Police in Padang, the capital of West Sumatra, were unable to stop thousands of university students who stormed into the local parliament building. The angry protesters smashed windows and chairs and wrote insults against the government on the building’s walls.
The protests are not associated with any particular party or group, and instead are led by students, who historically have been a driving force of political change in Indonesia. Their demonstrations in 1998 triggered events that led longtime strongman President Suharto to step down.
Student groups have vowed to continue returning to the streets until the new law is revoked.
Jakarta police chief Gatot Eddy Pramono said at least 265 students and 39 police officers were treated at several hospitals in the country’s capital for wounds suffered on Tuesday, with the injuries ranging from minor to serious.
Officials at Jakarta’s Pertamina Hospital said 90 students were treated there for injuries that included broken bones, head wounds and respiratory problems due to tear gas. Most were discharged yesterday, but three with head wounds remained hospitalized.
Another student was undergoing surgery at Pelni Hospital after suffering bleeding in his brain and fractured shoulder bones.
The fallout from the new law has threatened the credibility of President Joko Widodo, who recently won a second term after campaigning for clean governance.
The demonstrators are demanding that Widodo issue a government regulation replacing the law, which reduces the commission’s authority and independence.
Corruption is endemic in Indonesia and the anti-graft commission, one of the few effective institutions in the country of nearly 270 million people, is frequently under attack by lawmakers who want to reduce its powers.
Hundreds of officials from various branches of government have been arrested since the independent anti-graft commission was established in 2002 as part of people’s demands during a reform movement following the ouster of Suharto.
Pramono said at a news conference that police arrested 94 people accused of violent acts in Tuesday’s protests, which turned violent as darkness fell.
“We are still investigating whether they are students or other members of society with different interests,” he said.
The protesters also demanded that Parliament to delay votes on a new criminal code that would criminalize or increase penalties on a variety of sexual activities, as well as other bills on mining, land and labor.
Opponents say the proposed criminal code would violate the rights of women, religious minorities, lesbians, gays, bisexual and transgender people, as well as freedom of speech and association. AP