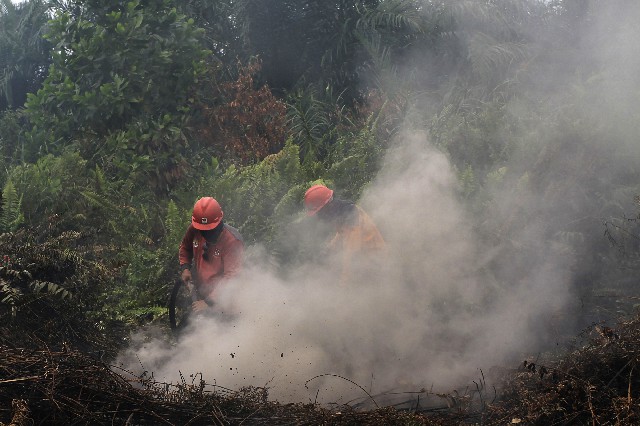 Indonesia has sealed off 30 companies amid a row with Malaysia over forest fires that are spreading a thick, noxious haze around Southeast Asia, officials said Saturday.
The plantation companies, including a Singapore-based company and four firms affiliated with Malaysian corporate groups, are under scrutiny and waiting for decisions on possible punishment, said Sugeng Riyanto, the law enforcement director at Indonesia’s Forestry and Environment Ministry.
Nearly every year, Indonesian forest fires spread health-damaging haze across the country and into neighboring Malaysia and Singapore. The fires are often started by smallholders and plantation owners to clear land for planting.
Indonesia’s forestry and environment minister, Siti Nurbaya Bakar, told reporters Friday that the government will prosecute a number of companies as a deterrent to setting fires.
The move came days after she disputed that the smoke was coming from Indonesia, noting that hotspots were also detected in Malaysia’s Sarawak state.
Malaysia’s environment minister, Yeo Bee Yin, responded immediately, telling Indonesia “not to be in denial.” She cited data that showed that the haze impacting parts of Malaysia originated in Indonesia.
The head of Indonesia’s Meteorology, Climatology and Geophysics Agency, Dwikorita Karnawati, dismissed claims by Malaysia that haze from Indonesia has drifted to the neighboring nation for days. She said the haze began to enter the area above peninsular Malaysia and Serawak state on Thursday morning.
She said the agency’s satellites and its Geohotspot analysis on Thursday detected 1,231 hotspots on Sumatra island and 1,865 on Borneo. It also detected 412 hotspots in Malaysia’s state of Serawak and 216 in Sabah.
Officials have said Malaysian Prime Minister Mahathir Mohamad would write to Indonesian President Joko Widodo to press for urgent action to tackle the cross-border haze.
Many areas of Indonesia are prone to rapid burning because of the draining of swampy peatland forests for pulp wood and palm oil plantations.
Poor visibility caused by smoke had caused delays of several flights in Indonesia and Malaysia and prompted authorities to shut schools in some parts of the two countries this week.
Malaysia’s primary industries minister, Teresa Kok, expressed her concern over the action taken by Indonesian authorities against the land belonging to the subsidiaries of four major Malaysian-owned palm oil plantation companies.
“This is a very serious accusation indeed,” Kok said in a statement on Friday.
She said she would talk with her Indonesian counterpart and hopes to resolve the matter quickly and amicably.
The Indonesian Disaster Mitigation Agency said Saturday that 99% of the hotspots were caused by deliberately set fires, leading to very poor air quality in six provinces with a combined population of more than 23 million. The provinces have declared a state of emergency.
The agency said 42 helicopters have dropped nearly 240 million liters of water and 160 tons of salt for cloud seeding as part of the firefighting efforts.
Indonesian authorities have deployed more than 9,000 people to fight the fires, which have razed more than 328,700 hectares of land across the nation, with more than half in the provinces of Riau, Jambi, South Sumatra, West Kalimantan, Central Kalimantan and South Kalimantan. Niniek Karmini & Eileen Ng, Jakarta, AP