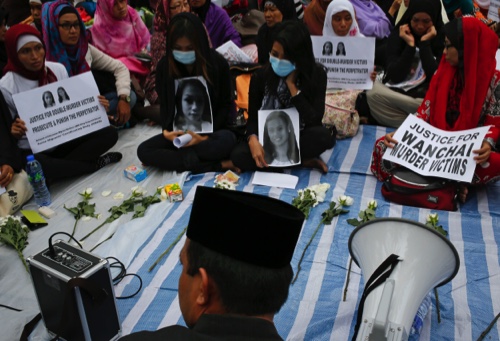 More than 100 Indonesians in Hong Kong held a prayer vigil and demanded justice yesterday for two Indonesian women found stabbed to death in a case that has shocked this city.
Sitting on a soccer field in the city’s Victoria Park, many wept as they remembered the two victims, 25-year-old Sumarti Ningsih and 29-year-old Seneng Mujiasih. Like the two women, many of those at the vigil came to Hong Kong as domestic workers.
British banker Rurik George Caton Jutting, 29, has been charged with murdering the two women but has not yet entered a plea. On Nov. 1, he led police to his 31st-floor upscale apartment near the city’s Wan Chai red-light district, where they found the two women’s bodies.
Ningsih’s cousin, Jumiati, said at the vigil that she had last seen Ningsih in August in their home village in Indonesia. Like many Indonesians, Jumiati goes by only one name.
She said she called police about a week ago to report that Ningsih was missing and later was asked to identify her body. She said her cousin lived in Wan Chai.
“I hope the killer will be punished and will feel the same as what has been done to my cousin,” Jumiati said.
Susiati, a friend of Ningsih’s, broke down in tears as she remembered Ningsih, who had a 5-year-old son back home.
“I have lost my best friend, and I am devastated,” she said.
Several in the crowd held signs demanding reforms to Hong Kong and Indonesian laws governing how domestic workers can find work and how long they can stay in the semiautonomous city. About half of the 319,325 migrant domestic workers in Hong Kong are Indonesian, and nearly all are women, according to the human rights group Amnesty International.
Mujiasih had overstayed her domestic worker visa, while Ningsih had returned to the city on a tourist visa, said Indonesian Consulate spokesman Sam Aryadi.
“She was good and she was nice to her family,” Jumiati said of her cousin. “She tried to work, work and work to give her son a better life.” AP