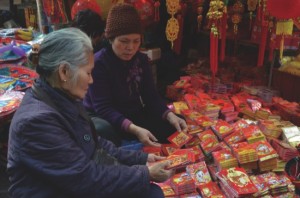 The traditional scene of children clad in red, knelt down, kowtowing to their elders, who hand them red envelopes containing “lucky money” for Spring Festival is now a rarity.
Nowadays, this has been replaced by one tap on a mobile app, with no need to even meet in person.
Ushering in the Year of the Sheep, people across the country could be seen shaking their cell phones in order to receive digital red envelopes.
Several Internet companies, including Tencent, Alibaba, Sina and Baidu, released red envelope games, hoping to grab a slice of the e-payment market, as users must link their debit or credit cards to their accounts.
While elderly relatives continued to send the traditional red envelopes, the younger generation exchanged e-envelopes.
Guo Lifeng, a migrant working in east China’s Zhejiang Province, did not go back to central Hubei Province this Spring Festival. However, he did not feel lonely as his family created a WeChat group to exchange red envelopes and blessings.
“Tradition is still tradition, but nowadays it has been injected with a new vigor, but the original customs are still there,” Guo said.
On Lunar New Year’s Eve last Wednesday, more than one billion people sent or received red envelopes on WeChat. Alibaba’s Alipay saw 4 billion yuan (about USD650 million) sent on that day alone.
There were around 649 million Chinese Internet users as of December, including 557 million that used their cell phones to connect to the Internet.
The festival has helped cultivate loyalty to certain Internet brands, Hong Tao of Beijing Technology and Business University said.
“Giving and accepting red envelopes is a way of socializing. [With] only a smart phone, people can easily interact with each other,” said Wang Dengfeng from Peking University’s psychology school.
“It is good that this old tradition has been modernized,” said Wan Jianzhong, an expert on folk customs and cultural anthropology at Beijing Normal University, but he warned that people should not be obsessed with the amount inside the red envelopes, instead they should value the goodwill attached to them.
This year the number of SMS’ sent dropped markedly, tens of billions were sent during past Spring Festivals. The reason: SMS have a cost, but prepaid Internet access is free.
Traditionally, Chinese stock up on holiday essentials in the weeks leading up to Spring Festival, as most businesses will close for at least the first two or three days of the week-long holiday.
In recent years, in e-commerce crazy China, people have shifted from shopping at street fairs to buying from online retailers.
Young people, especially, favor online Spring Festival shopping for its efficiency and convenience.
Meanwhile, certain officials can use this online trend to their advantage – to send their superiors discreet gifts, away from prying eyes. In recent years, these cards have been the focus of the austerity campaign.
Experts, however, have called for rules to be established to regulate online cash flow and other irregularities. Xinhua