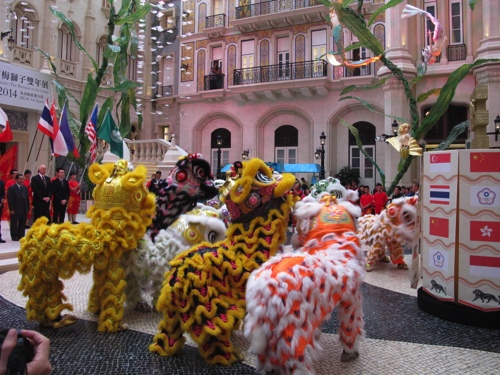 The 4th International Lion Dance Championship will take place at MGM Macau on November 8 and 9, with 24 troupes coming from across the globe. The Championship will be hosted by MGM Macau and co-organized by the Wushu General Association of Macau.
This year, the Lion Dance Championship features 24 lion dance troupes from 10 different countries and regions such as mainland China, HK, Macau, Taiwan, Thailand, Indonesia, Malaysia, Singapore, the Philippines and Italy. The troupes will be battling it out to take home the grand prize.
The lion dance is a form of traditional dance in Chinese culture and other Asian countries, in which performers mimic a lion’s movements while wearing a lion costume.
A traditional eye-dotting ceremony was officiated by guests yesterday, which signifies the awakening of the dancing lions and is intended to bring good luck to the upcoming event.
First held in 2011, MGM has introduced a women’s Lion Dance competition into the championship. To carry on the tradition, this year the event will again feature the women’s category, with nine women’s teams coming from different regions such as the mainland, HK, Macau, Taiwan, Indonesia, Malaysia, Singapore, the Philippines and Italy. 15 male troupes will also participate in the competition.
Mr Chan Weng Kit, Chairman of the Dragon and Lion Dance federation of Asia, said in the opening ceremony that the Chinese lion dance has a long history and has long been a popular sport. He stated that holding the lion dance competition in Macau displays the city’s characteristic ability to combine cultures from the east and the west.
Mr Grant Bowie, Chief Executive Officer and Executive Director of MGM China Holdings Ltd., stated: “As Macau continues to diversify, we need to look not just to the future, but also to encourage and develop the arts, culture and history of Macau and China.”