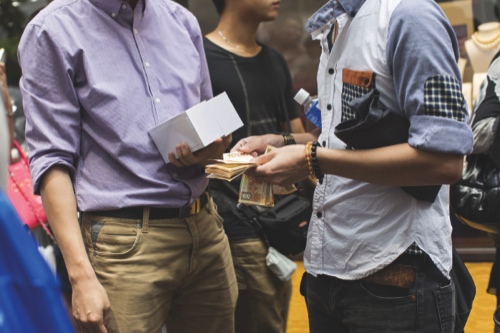 Liu Min stands a few feet from an Apple store in Beijing hawking something that can’t be bought inside: the new iPhone 6.
While the device debuted yesterday in the U.S., Hong Kong, Japan and Australia, there is no release date set for the world’s biggest smartphone market. That creates an opportunity for Liu, who promises two-day delivery of a 16-gigabyte iPhone 6 for 8,000 yuan (USD1,303) – almost double the price on Apple’s Hong Kong website.
“It’s going to be a while before the new iPhone comes to China officially, so if you want it now, you have to pay up,” Liu said, pacing outside the Sanlitun district store selling screen protectors. “Give me a call if you want one.”
Liu, who wouldn’t discuss his supply chain, wasn’t alone. Four vendors nearby offered the 128-gigabyte iPhone 6 at the equivalent of about $2,441, compared with the Hong Kong price of about $927.
Consumers typically waited at least three months for Apple to start selling new iPhones in China, triggering a flood of devices into the country’s black market. As many as 5 million may be smuggled into China before the new models are officially available, said Neil Shah, Mumbai-based research director for devices at Counterpoint Research.
The promise of lucrative returns also has many of Hong Kong’s finance professionals trying to capitalize on one of the biggest arbitrage opportunities in China.
“This is a sure bet to make money,” said Ronald Wan, the chief China adviser at Asian Capital Holdings Ltd. in Hong Kong. “From a 50 percent to 150 percent markup, it’s better than the stock market.”
The Apple delay stems from the fact that the new iPhones have cleared just two of three regulatory steps, the official Xinhua News Agency reported Saturday. The devices still need network access licenses from the Ministry of Industry and Information Technology, Xinhua said.
Carolyn Wu, a Beijing-based spokeswoman for Apple, declined to comment on when the new models will be available in China, what impact smuggling will have on the market or on the status of the government applications.
Wu repeated previous statements that the iPhone 6 “will get here as soon as possible.”
China Mobile Ltd. (941), the world’s largest carrier by users, doesn’t know when the iPhone 6 models will be available in the market, Chairman Xi Guohua said this week.
Outside the Apple Store in Hong Kong’s IFC mall, two young women were reselling the new phones for double the price. One foreigner held up a sign saying, “Need an iPhone 6.”
“Chinese consumers will still find ways to get their hands on the device, regardless of the delay,” said Sandy Shen, a Shanghai-based analyst with Gartner Inc. “I think the lag may even fuel the enthusiasm for the device.” Bloomberg