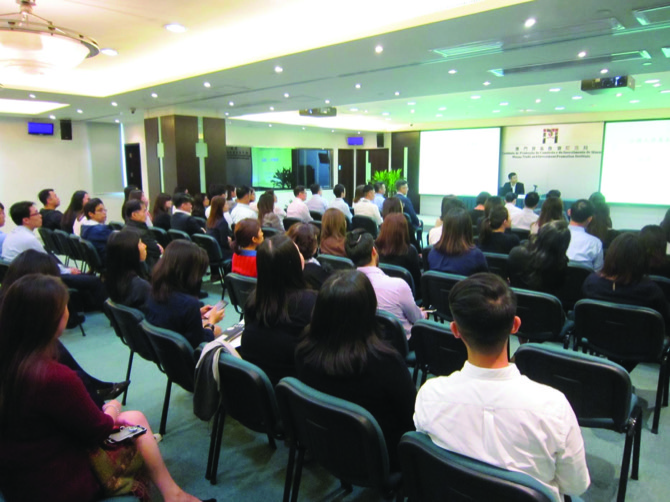 The Macao Trade and Investment Promotion Institute (IPIM) organized an integrity seminar this week. Over 60 IPIM staff members participated in the event, including the acting president Irene Lau, and executive directors Sam Lei and Agostinho Vong, departmental heads, front-line services personnel and new recruits. A CCAC representative was also invited to speak at the seminar.

IPIM’s Acting President Irene Lau said that the seminar further enhanced staff members’ understanding and awareness of probity, particularly in upholding the principle of being decent and law-abiding in their positions.

During the seminar, the representative from CCAC talked about the major roles of CCAC, as well as integrity-building.  Detailed information was also provided on areas such as common duty-related crimes applicable to civil servants, the Ombudsman’s role, and conflict of interests. According to a statement issued by IPIM, cases were cited to explain and analyze unlawful acts which may constitute a breach of honesty and integrity while acting in an official capacity; this was in order to appeal to the participants to exercise vigilance and uphold high standards of integrity and probity.

Late last month, CCAC announced that the president of the IPIM, Jackson Chang, was under criminal investigation for alleged irregularities regarding the granting of residency status through an investment scheme. The probe involved two other high-ranking officials at IPIM. In a statement issued yesterday by IPIM, it was stated that the institution “attaches great importance to the integrity, law-abiding awareness and professional ethics of all of its staff.”